ANN ARBOR, Mich. - The knock on Jim Harbaugh at Michigan is that he hasn’t won enough big games against the school’s top rivals. It might be time to revise that.

Harbaugh hasn’t beaten Ohio State - the most important foe on the Wolverines’ schedule - but Michigan has sure roughed up Notre Dame and Michigan State this year.

Harbaugh’s Wolverines stomped on Michigan State 44-10 on Saturday, securing their second straight victory in this in-state rivalry and leaving little doubt that the pendulum has swung from East Lansing back toward Ann Arbor. It was the most lopsided win for Michigan in the series since 2002, and it came on the heels of a 45-14 rout of Notre Dame last month.

The Wolverines never had beaten both those teams by at least 30 points in the same season.

“Really happy. It’s a big game, it’s for the state championship,” Harbaugh said after improving to 3-2 against Michigan State as Michigan’s coach. “Now our team, everybody that’s in that locker room, has the advantage. The fifth-year seniors are 3-2, the seniors are 3-1 ... the juniors are 2-1, the sophomores are 2-0 and the freshmen are 1-0. So it’s a big program win.” 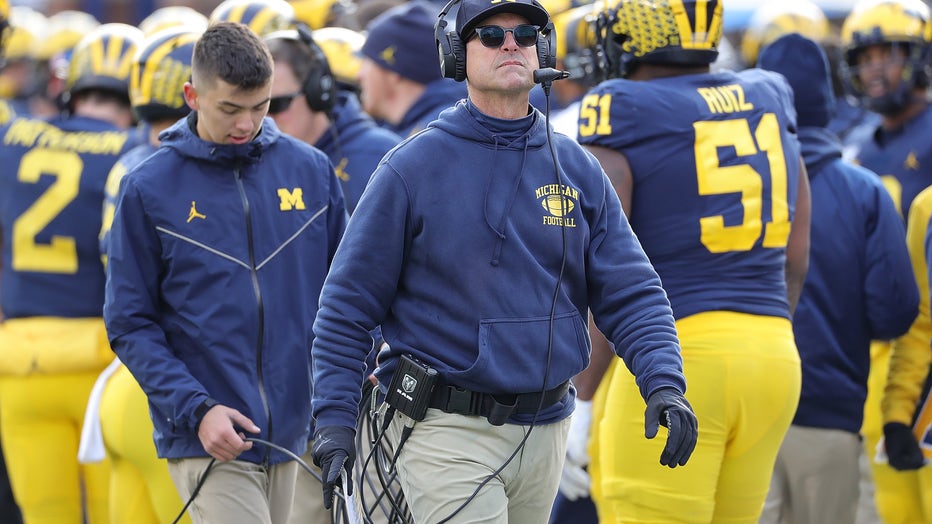 Michigan beat Notre Dame with a dominating running game, outgaining the Irish 303-47 on the ground. Against Michigan State, the Wolverines won by passing. Shea Patterson threw for 384 yards and four touchdowns, and Ronnie Bell had nine catches for 150 yards.

It wasn’t all speed and finesse, of course. Earlier in the decade, the Spartans would overwhelm Michigan physically, and there was a bit of that in the other direction Saturday. The Wolverines outscored Michigan State 17-0 in the fourth quarter.

There was also the usual bad blood, and the officials were on high alert, flagging the two teams 16 times for 184 yards in penalties. The Spartans had a player ejected in the fourth quarter when defensive lineman Jacub Panasiuk was tossed following a late hit on Patterson.

“We play football over here,” Michigan defensive back Josh Metellus said. “I don’t know what they do over there, but we play football, and it showed today.”

As satisfying as the day was for the Wolverines, the Spartans are at the opposite end of the spectrum. Any thought of salvaging some glory this season with an upset of Michigan was extinguished in emphatic fashion. There were no silver linings after Michigan State lost this matchup for a second straight year - the first time that’s happened since the Wolverines won six straight times from 2002-07.

“It’s hard, and we’ve just got to keep fighting,” Spartans linebacker Antjuan Simmons said. “We can’t lay down at all. We’ve got two more games.”

The Spartans have missed the postseason only once in 12 seasons under coach Mark Dantonio. They’ll need to beat Rutgers and Maryland to end the regular season if they want to reach six wins and secure bowl eligibility.

That’s certainly doable, but the Spartans have looked overmatched against their toughest opponents - teams they’ve been able to compete with and beat for much of Dantonio’s tenure. Michigan State was outscored 144-27 in losses to Ohio State, Wisconsin, Penn State and Michigan this year.

Harbaugh has faced questions about beating rivals since arriving at Michigan. Now it’s Michigan State’s turn to face the fact that it has fallen behind in its most important rivalry.

“We work on this game all year long, to some degree, because it’s an important game,” Dantonio said. “But after it’s done, whether you win or you lose, you must let things go and you must move to the next challenge, so that’s what we’ve always tried to do.”