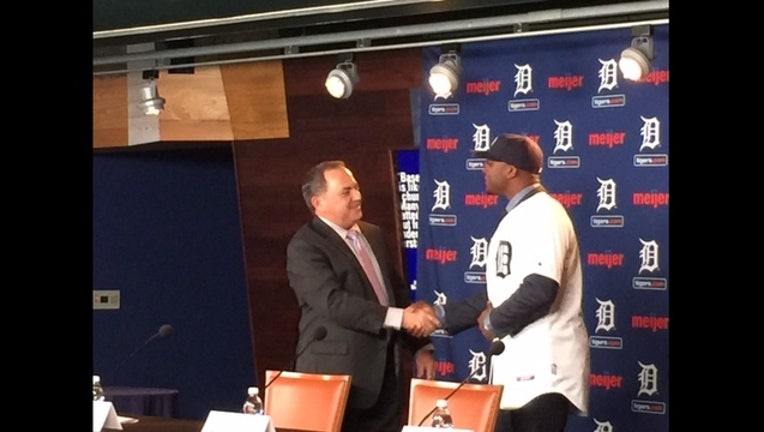 CLEARWATER, Fla. (AP) - Detroit outfielder Justin Upton hit his first two home runs in a Tigers uniform in a 6-5 win over the Philadelphia Phillies on Saturday.

Upton, who signed a six-year, $132 million free-agent contract with Detroit in January, entered the day hitting .189 (7-for-37) with one extra base hit, a double, in 15 games this spring.

But he launched a two-out, solo home run off of Philadelphia left-hander James Russell in the first inning and then added a second solo shot off of right-hander Luis Garcia in the sixth inning.

"Probably the last four days I've started to feel better, more comfortable, everything getting going," Upton said. "It's coming along. ... It's going to come at some point so you just have to stay the course."

"I'm sure he's happy, that was great to see," said former American League MVP and Cy Young Award winner Justin Verlander, the beneficiary of Upton's home runs. "When he's right, it's impressive. He can carry a ballclub by himself."

The 33-year-old Verlander had a 3-2 lead entering the sixth inning, when he gave up a leadoff double to Ryan Howard and was removed from the game. Cedric Hunter hit a sacrifice fly later in the inning to bring Howard home with the tying run.

Howard, the 2006 National League MVP who could platoon with Darin Ruf this year, went 2 for 4 with an RBI.

Phillies: LHP James Russell was the first man out in a bullpen game for the Phillies, who are attempting to finalize the three or four openings that remain in the relief corps on the 25-man roster. Russell retired three of the four batters in the first hitting, surrendering a solo home run to Upton. "It kind of brings the best out of you," Russell said of the competition. "It kind of takes us out of your comfort zone. You're used to kind of having a job, so it's nice to have your back up against a wall and you have to fight for something."

Tigers: Verlander felt that his next to last start of the spring was a little "up and down." The Opening Day starter scattered seven hits in five-plus innings, including a solo home run to Freddy Galvis. "The first couple innings weren't bad, and then I ran into a little trouble, location kind of got off a little," Verlander said. "But I was able to rein it back in. Overall, a step in the right direction."

Phillies: OF/INF Cody Asche (right oblique strain) played in a minor league game on Saturday. Asche has not appeared in a Grapefruit League game this spring and probably won't, since the Phillies are likely to put him on the disabled list to start the regular season, backdating the stint to March 25.

Tigers: DH/1B Victor Martinez (left hamstring strain) was scheduled to play in a minor league game on Saturday, and then again in the next two days, in an effort to get back in the lineup before the team breaks camp next week. Martinez has been sidelined since March 14.

UP NEXT: The Phillies will visit former general manager Ruben Amaro Jr., now the first base coach of the Boston Red Sox, in Fort Myers on Sunday. Jerad Eickhoff is scheduled to start opposite fellow right-hander Stephen Wright. The Detroit Tigers play host to Houston on Easter Sunday, with Mike Pelfrey on tap to pitch opposite Astros right-hander Mike Fiers.

MINOR MATTERS: Philadelphia right-hander Aaron Nola pitched in a minor league spring training game against Toronto Blue Jays minor leaguers. His next start is likely to come up north, in an exhibition against Phillies prospects on Thursday night, before taking the ball in the second game of the regular season at Cincinnati on April 6.