Iafallo scored 23 seconds into overtime and the Kings beat the Detroit Red Wings 3-2 on Thursday night.

Kempe scored with 1:48 remaining in the third period to tie the game at 2-all, and Iafallo got a shot into an open net after Drew Doughty's shot caromed off the boards.

“We stuck with it,” said Iafallo, who has a goal and three assists during a four-game point streak. “Everybody was making the right plays. Most of the shifts in that third we were buzzing and getting the puck in deep and going to work, so it was good for us and gave us momentum at the end there.”

It was a welcome goal for Kempe, who was a healthy scratch against Minnesota on Tuesday. Kings coach Todd McLellan brought him back into the lineup at left wing instead of center, where he played last season. But Kempe had struggled to start his fourth season in the NHL, getting one goal and three assists in his first 17 games. 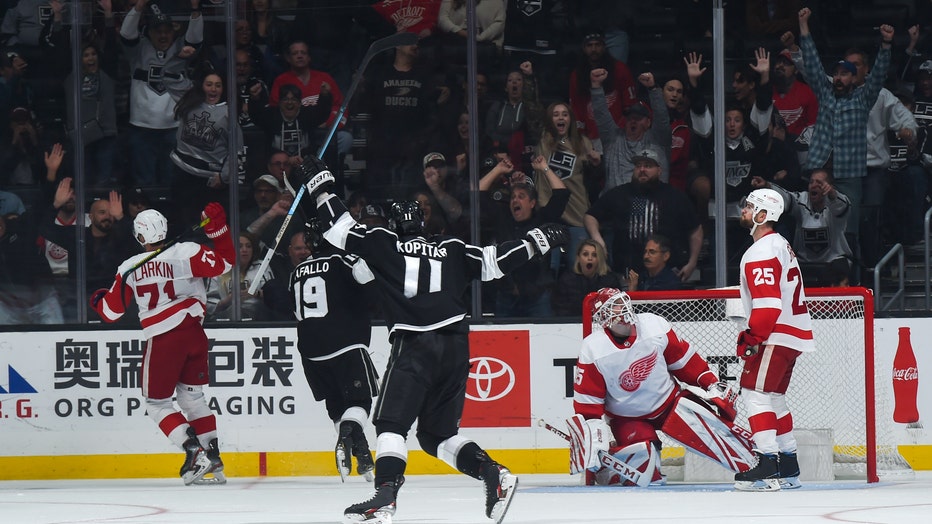 By putting Kempe on the wing, McLellan believed the 23-year-old would be able to find his game. That assumption was right when Kempe got positioned in front of the net and scored on a backhander off a rebound of a shot by Matt Roy with goalie Jonathan Quick off for the extra attacker.

“You better be able to play all over the rink, but if it’s on the wall where he believes he is most effective, then we’re going to play him there for a little while and get his confidence up,” McLellan said. “But I think when it’s all said and done, it’s just him playing really hard and competitive tonight. If he’s comfortable there, then great.”

Anze Kopitar had a goal and two assists for Los Angeles, and Quick made 19 saves. The Kings won consecutive games for the second time this season.

Tyler Bertuzzi scored twice for Detroit. The Red Wings had their three-game win streak snapped, but found satisfaction in earning a point after the Kings controlled long stretches of the game.

“I thought we played really good,” said Jonathan Bernier, who made 28 saves. “You know, it comes down to finding a way at the end there, the 6-on-5, to eliminate that rebound or try to block it or somehow you got to find a way. But I thought overall it was pretty good. We picked up our game, and I thought second half was really good.”

It was the top line of Bertuzzi, Dylan Larkin and Anthony Mantha that propelled the Red Wings, combining for all five points. Mantha had two assists, giving him two goals and five assists in a five-game point streak. Larkin had an assist to extend his point streak to four games.

The Red Wings tied the game at 1-all on Bertuzzi’s seventh goal at 4:36 of the second period, and Bertuzzi scored to give Detroit a 2-1 lead at 2:58 of the third period. It was Bertuzzi’s second multi-goal game; he scored twice in the opener at Nashville.

“They complement each other well, especially when they’re playing at the top of their game,” Red Wings coach Jeff Blashill said of the combination of Bertuzzi, Larkin and Mantha. “They feed off each other pretty well, and they made some other real good plays that had a chance to go in the net.”

Kopitar scored for the third straight game to give the Kings a 1-0 lead 5:47 into the first period. He also extended his point streak to five games, with three goals and five assists in the span.

NOTES: Red Wings D Patrik Nemeth will miss several weeks because of an infection sustained after blocking a shot against Vegas on Sunday. ... Red Wings D Filip Hronek (lower body) did not play. Blashill characterized the injury as a bruise, not a fracture. ... Kings LW Ilya Kovalchuk was scratched for the second straight game. “Everybody’s got a healthy scratch, and we’re in last place, so coach has to do something to change things,” Kovalchuk said after practice Thursday. “I’m just here every day for the guys, for the team, and if they need me, I’m ready to go.”

Red Wings: Wrap up their trip at the San Jose Sharks on Saturday.