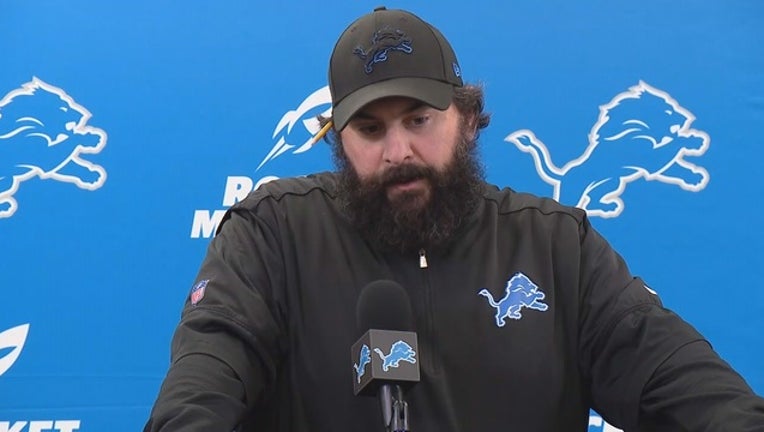 ALLEN PARK, Mich. (AP) - In firing him after the 2017 season, the Detroit Lions indicated the Jim Caldwell era was just not good enough.

But meaningless December football is back in Detroit again as first-year coach Matt Patricia's Lions will play out the string with four games with nothing at stake but draft position remain.

The Lions are 4-8 and all but mathematically eliminated from the NFC playoff race. Road games at Arizona and Buffalo are next before Detroit finishes with divisional games at home against Minnesota and at Green Bay.

After Sunday's 30-16 loss to the Los Angeles Rams, Detroit has to win out to finish better than Caldwell's worst of four seasons as coach. After three winning seasons and two playoff berths under Caldwell, the Lions will be .500-or-below for the 13th time in the past 14 non-Caldwell coached seasons.

A lot of things have changed in Matthew Stafford's 10 seasons with the Lions, but the franchise is back in the losing position he grew accustomed to in the first half of his career.

"I come to work every day, work my tail off, try to push our team to be as good as we can be," Stafford said Sunday after his fumble on an Aaron Donald sack ended a chance for the Lions to take their first lead in the fourth quarter.

"There was some good in this game, there was some bad. We've got to fix the bad and keep doing a lot of the good. But I'm going to come to work ready to go."

Public reflection is rare during an NFL season, especially under Patricia, who was groomed under Bill Belichick in New England.

Injuries have decimated Stafford's skill position options, as wide receiver Marvin Jones (knee) is out for the season and running back Kerryon Johnson (knee) missed his second straight game Sunday. Wide receiver Golden Tate was leading the Lions in receptions for the fifth straight season when he was traded to Philadelphia on Oct. 30.

"There was a lot more good than bad, we actually played a pretty good game, the score wasn't a great indication of how close that game was," Harrison said after the Lions trailed 16-13 heading into the fourth quarter against a Super Bowl contender. "It was encouraging to see everybody take the technique and the coaching and bring it into Sunday."

The Lions did have a win on Monday though.

Offensive lineman Taylor Decker scored his first touchdown of his football career on Sunday, faking a block but releasing into a wide-open space of the Rams' defense for an 11-yard touchdown.

In his euphoria, Decker threw the ball into the stands. Later, on Twitter, Decker put out a plea to relieve the keepsake.

"To whoever caught/has the ball I threw into the stands," his tweet Sunday night began, "I've played football since first grade, and that was my first ever touchdown. I'd love to have the ball, and would be more than happy to hook you up if you'd be willing. #defendtheden #bigmantouchdown"

The story had a happy ending, with Decker tweeting Monday morning that the case was solved.

Decker tweeted: "I HAVE FOUND HIM!!!!!!! AND HE IS BEING GREAT ABOUT IT #socialmediastrikesagain"

It's the kind of karma that his team could use.