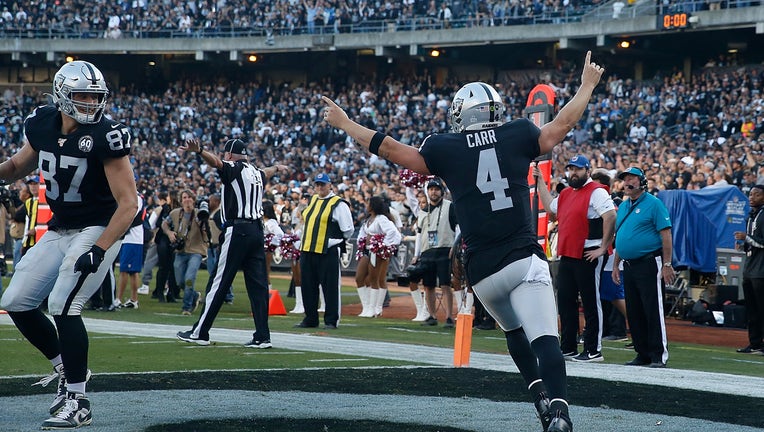 OAKLAND, CALIFORNIA - NOVEMBER 03: Quarterback Derek Carr #4 of the Oakland Raiders celebrates after a win against the Detroit Lions at RingCentral Coliseum on November 03, 2019 in Oakland, California. (Photo by Lachlan Cunningham/Getty Images)

OAKLAND, Calif. - Detroit's defense couldn't come up with the late stop the Lions needed on one end of the field. Matthew Stafford couldn't convert the fourth-down play at the other end.

It added up to another loss for the Lions, who are quickly falling out of contention in the NFC playoff race after a promising start to the season.

Matthew Stafford's pass to Logan Thomas from the 1 was broken up in the end zone with 3 seconds remaining Sunday, sending the Lions to their fourth loss in five games with a 31-24 defeat to the Oakland Raiders.

"We didn't convert, we didn't score, we didn't win the game," Stafford said. "You can look at it all you want. Had we scored there I wouldn't be fielding these questions. We just have to execute the play better and score."

Stafford did plenty of good things against the Raiders but it was a few missed opportunities that proved to be the difference.

There was a botched handoff to J.D. McKissic on the opening drive that denied Detroit (3-4-1) a scoring opportunity, an interception in the end zone in the second quarter when the Lions had a chance to take a two-score lead and then problems on both sides of the ball in the closing minutes after Stafford's 26-yard TD pass to McKissic tied the game with 5:16 to play.

The Raiders managed to move the ball 66 yards on the next four plays to get inside the 10 with help of two long passes to backup running back Jalen Richard.

Then after two stops by Detroit, Derek Carr managed to scramble on a third-down play and find Hunter Renfrow on a 9-yard TD pass with 2:04 remaining to give Oakland the lead.

"It's a tough pill to swallow," linebacker Devon Kennard. "The last few weeks have been on us defensively. I feel like if we'd play better defensively we'd be in a much better position right now. But you can't panic. It's halfway through the season. We've got eight more games left, a lot of ball to be played. I believe in the guys in this locker room. We have to get this fixed. It starts with defense, controlling what you can control. Once we do that we'll be all right."

The Lions still had a chance and Stafford managed to move the ball inside the 10 with less than a minute to play following a 26-yard pass interference call on Nevin Lawson.

Stafford scrambled for 4 yards to the 4 on first down, was sacked by P.J. Hall on second down and then scrambled 13 yards to the 1 on third down. With the clock running down, the Raiders called a timeout with 8 seconds left to get the right personnel on the field.

The Lions responded with heavy personnel with six offensive linemen, two tight ends and no receivers and called for a pass play.

Stafford tried to find Thomas in the back of the end zone over smaller safety Karl Joseph, but the play was broken up, sealing another loss for Detroit.

"We had a one-on-one shot," Stafford said. "We had one of our big guys on one of their not-so-big guys and a chance to go up and make it. I have to give him a better chance and a better ball."

That was the final play on a mostly productive day for Stafford, who threw for 406 yards and three touchdowns but had a hand in bothe turnovers as well.

But that still wasn't enough because the defense struggled to slow down Josh Jacobs and the Raiders running game and the offense had three drives get inside Oakland's 30 and end up without points.

"We all have to play better," Stafford said. "That's everybody. We're a team. There were plenty of plays out there that I missed that could have helped us win the game. Stuff that we all have to live with. We work so hard week in and week out, and if you don't come out with a win it obviously stings."