(AP) - In the blink of an eye, Week 4 of the NFL season is already upon us, and with it comes the best bets to reach the end zone.

Taylor’s production has waned since Week 1, going scoreless in his past two games, but he’s primed to correct his course this week against a Titans team that is our fourth-best matchup for opposing RBs, allowing 145 yards on the ground on average. With juicy -200 odds to score going in, Taylor is one of the week’s best bets to find the end zone.

The No. 2 RB in fantasy points per game thus far (17.6), Barkley is a weekly threat to score and Week 4 is no exception. He’ll face the Bears this week, and they’re a middling run defense at best. No RB has been on the field more than Barkley this season (89% snap count), and WR Sterling Shepard is out for the year, so the Giants will have to lean on Barkley even more than usual. With +100 odds to reach the end zone, in addition to these other favorable conditions, Barkley is a strong candidate to score in Week 4.

Williams has been the surprise RB of the season, scoring four TDs over his first three games for a Lions offense that has been surprising. He goes up against a Seattle team this week that is our third-best matchup for opposing RBs going in, allowing 4.9 yards per carry thus far. With a 54.92% TD dependency, -125 scoring odds, and no D’Andre Swift to take away carries, Williams could very well score in Week 4. 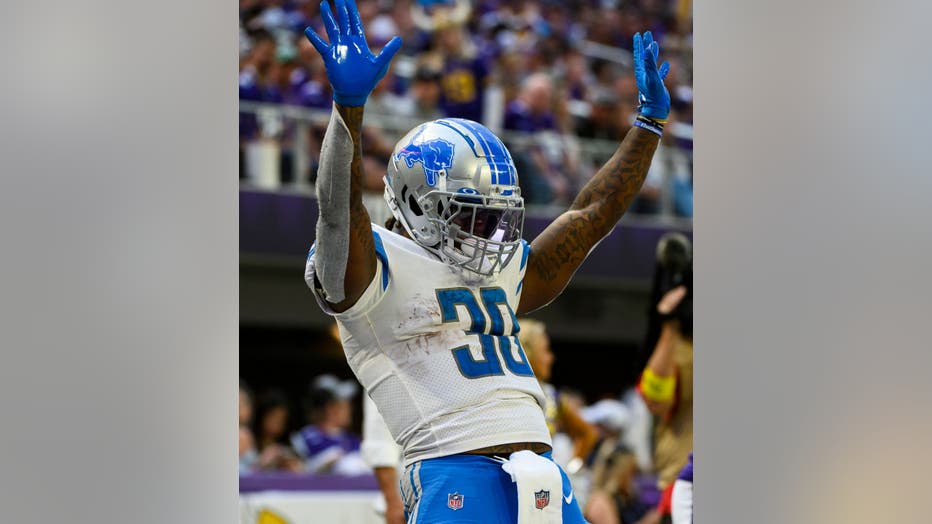 MINNEAPOLIS, MN - SEPTEMBER 25: Jamaal Williams #30 of the Detroit Lions thrusts after scoring a touchdown in the third quarter of the game against the Minnesota Vikings at U.S. Bank Stadium on September 25, 2022 in Minneapolis, Minnesota. (Photo by

Tied for the league lead in WR TDs (four) and pacing all WRs with 19.5 fantasy points per game, Diggs is sitting pretty this week in a matchup with the Ravens, our absolute best matchup for opposing WRs. Allowing 280.7 yards per game through the air, the Ravens secondary has struggled somewhat. Coming into the game with -135 odds to score, best for WRs this week, Diggs is second to none in his chances to bring in a TD in Week 4.

Evans sat out in Week 3 because of a suspension, but he’s returning this week to face a middle of the pack Chiefs secondary that just helped give the Colts their first win of the season. With impressive -105 odds to score, Evans is the Bucs’ best chance to find the end zone, as he’s one of the few WRs on the team who’s healthy enough to play this week. The offense will run through him and Leonard Fournette almost exclusively.

Chase was only able to bring in six of his 10 targets last week for 29 yards, but he still caught his second TD of the season. He’s a solid bet to score again this week as he faces a Miami defense that has allowed the ninth-most fantasy points to WRs going into Week 4. With a 91% snap count going in, Chase will continue to be the main offensive playmaker for the Bengals, as Joe Mixon has yet to score this season and he’s playing with an injured ankle. When a Bengal scores this week, the best bet is that it’s Chase.

This column was provided to The Associated Press by RosterWatch, www.rosterwatch.com.