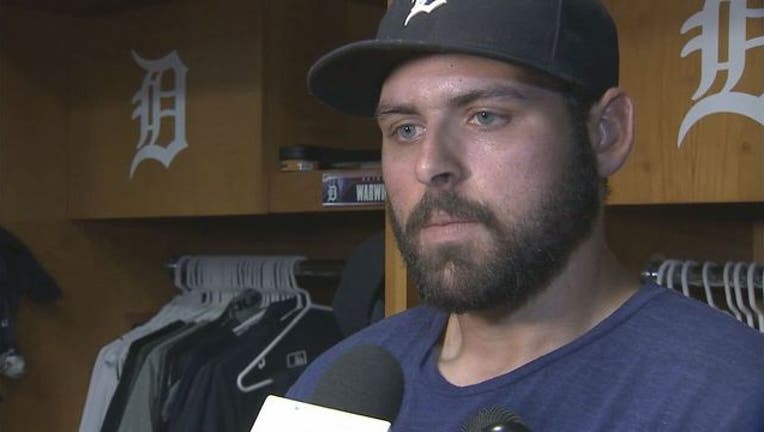 SEATTLE (AP) - Despite some early struggles, Hisashi Iwakuma continued his roll on the mound and with it advanced the suddenly improving hopes of the Seattle Mariners getting back into the postseason conversation.

Those struggles were just a minor blip for Iwakuma on his way to another masterful performance, throwing seven strong innings in Seattle's 3-0 win over the Detroit Tigers on Monday night.

"He is in a really good spot, a good roll and he feels that when he gets off mechanically for a few pitches he's able to correct it and get back on," Seattle manager Scott Servais said. "A testament you don't have to throw 93, 95 to get them out in this league if you execute and make pitches."

Iwakuma won for the seventh time in his last eight starts, backed by RBI singles from Mike Zunino and Kyle Seager off Michael Fulmer in the second inning as Seattle opened a key three-game series with its fourth straight win.

The Mariners moved within 2 1/2 games of Detroit and Boston for the second wild card in the American League.

"The pitching is amazing," Seattle's Nelson Cruz said. "If we want to make a run that's what we need. They've been doing a great job."

No one has been better for Seattle than Iwakuma. The right-hander allowed five hits and struck out eight, running his streak of scoreless innings at Safeco Field to 21 1/3. He retired 12 of the final 13 batters he faced, including striking out the side in the fourth.

Iwakuma (13-7) has developed into the ace of Seattle's staff, throwing at least seven innings in eight of his past 14 starts. And he got a little payback after being knocked around by Detroit in June, when he failed to make it through five innings and gave up five runs and 11 hits.

"When you give up a game you always think about coming back and repaying for that loss," Iwakuma said through an interpreter. "I'm happy that I got to do it today. We're on a streak right now and I don't want to stop the streak."

The performance by Iwakuma offset another solid start from Fulmer. The Tigers rising star threw seven innings and allowed only two hits while striking out six. Three of Seattle's five hits off Fulmer (9-3) came in the second inning when the Mariners took an early lead. The rookie suffered his first loss since June 17 — also the last time the Tigers lost when he started.

"I feel like my misses were in the right spots. ... I think as far as that goes I didn't miss middle too much," Fulmer said. "I think its just one inning and after that it felt great."

For a change, the runs for Seattle didn't come via the long ball.

Cruz led off the second with a double and scored when Seager rolled a ground ball behind Detroit's defensive shift and into center field. Seager moved into scoring position when Leonys Martin walked with one out and scored as Zunino was strong enough to dump a broken-bat single over third baseman Casey McGehee and into left field.

Seattle added a run in the eighth when Nori Aoki doubled with two outs and scored on Guillermo Heredia's RBI single.

Iwakuma and a pair of power arms out of the bullpen did the rest. Newly acquired Arquimedes Caminero pitched a perfect eighth in his Seattle debut and rookie Edwin Diaz pitched the ninth for his fifth save.

Tigers: Left-hander Daniel Norris was recalled from Triple-A Toledo and will start on Tuesday night. The Tigers placed right-hander Bruce Rondon on the paternity list to clear the roster spot for Norris.

Mariners: Starter Taijuan Walker was optioned to Triple-A Tacoma to open a roster spot for Caminero. Walker was roughed up for six runs in four innings in his last start. Ariel Miranda will take his spot in Seattle's rotation.

Tigers: Norris (1-0) will make his fifth appearance of the season and fourth start. Norris was on the disabled list from July 5-Aug. 2 with a strained oblique.

Mariners: Wade LeBlanc (1-0) makes his sixth start since being acquired by the Mariners. Seattle is 5-1 in his starts.