CLEVELAND - Triston McKenzie struck out a career-high 12 and extended his scoreless streak to 21 innings, leading the Cleveland Guardians to a 4-0 win over the Detroit Tigers on Thursday night.

McKenzie (7-6) pitched eight dominant innings, giving up five singles, walking none and working out of his only trouble in the sixth.

With runners at first and third, McKenzie struck out Eric Haase for the third out. The lanky right-hander celebrated by pounding his hand into his glove as he walked back to Cleveland's dugout.

Josh Naylor homered in the first off rookie Elvin Rodríguez (0-3), who made his first start for the Tigers since June 10. All-Star Andrés Giménez added a solo shot in the eighth inning for Cleveland.

McKenzie's performance — he matched his longest outing, set a career-best with 109 pitches and won his third start in a row — helped the Guardians end a streak of five consecutive losses to the Tigers. Detroit swept four from Cleveland last week at Comerica Park. 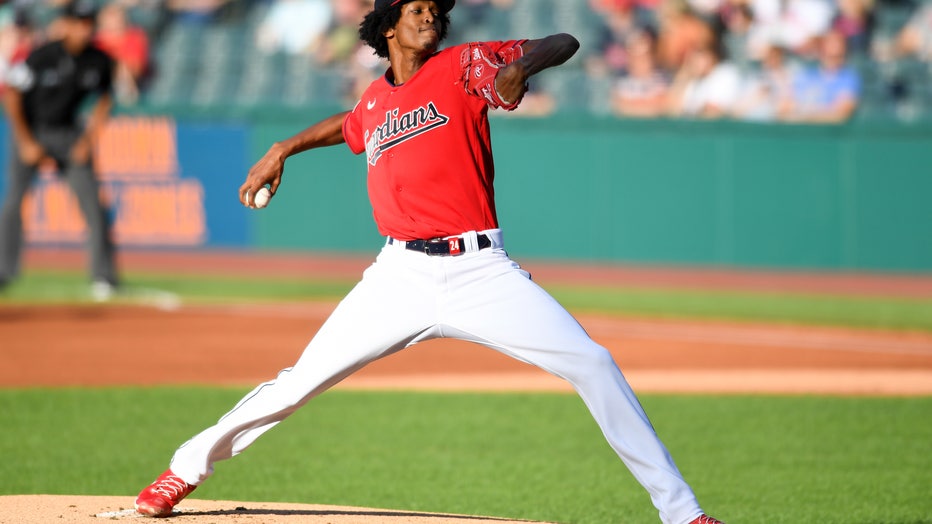 CLEVELAND, OH - JULY 14: Starting pitcher Triston McKenzie #24 of the Cleveland Guardians pitches during the first inning against the Detroit Tigers at Progressive Field on July 14, 2022 in Cleveland, Ohio. (Photo by Nick Cammett/Getty Images)

Naylor put the Guardians up 1-0 in the second when he drove Rodríguez's first pitch over the center-field wall for his 12th homer.

All-Star infielders José Ramírez and Giménez drove in runs in the third inning to give the Guardians a 3-0 lead.

Ramírez followed a double by rookie Steven Kwan and Amed Rosario's base hit with a run-scoring single, and Giménez, who will make his All-Star debut on Tuesday in Los Angeles, delivered a two-out RBI double.

Ramírez was added to the Home Run Derby on Wednesday. He has 17 homers this season but has connected just once since June 10 while dealing with a thumb injury.

"When you think about what this guy means to us, he has earned the right," Francona said. "And he asked, which I thought was really respectful. I told him if it’s something you want to do, we support you."

Tigers manager A.J. Hinch passes down the game's history to his young players whenever possible.

Hinch responded to a question about former Detroit slugger Willie Horton being invited to serve as an honorary coach at next week's All-Star Game and divulged he educates his players about the ones who preceded them.

Last year, Hinch visited the Negro League Museum in Kansas City with some Tigers. Before Thursday's game, he pointed out the retired numbers inside Progressive Field and asked players if they knew about Hall of Famer Bob Feller.

"I don’t necessarily know what it adds to their career," Hinch said. "We want to share our wisdom about the game, but we also want to share the history."

Guardians: C Luke Maile's jaw was sore after taking a foul tip off his mask during the ninth of Wednesday's game. Francona said Maile underwent several tests and was feeling OK.