The Big Ten championship winning quarterback and team captain didn’t hold back, making it clear he was surprised coach Jim Harbaugh chose to split who takes the first snap over the first two weeks.

McNamara had a lackluster performance that was made moot by a dominant defense as the eighth-ranked Wolverines routed Colorado State 51-7 Saturday.

The fourth-year player started the opener and is scheduled to sit at the beginning of the Hawaii game next week when McCarthy gets a shot to take the first snap. 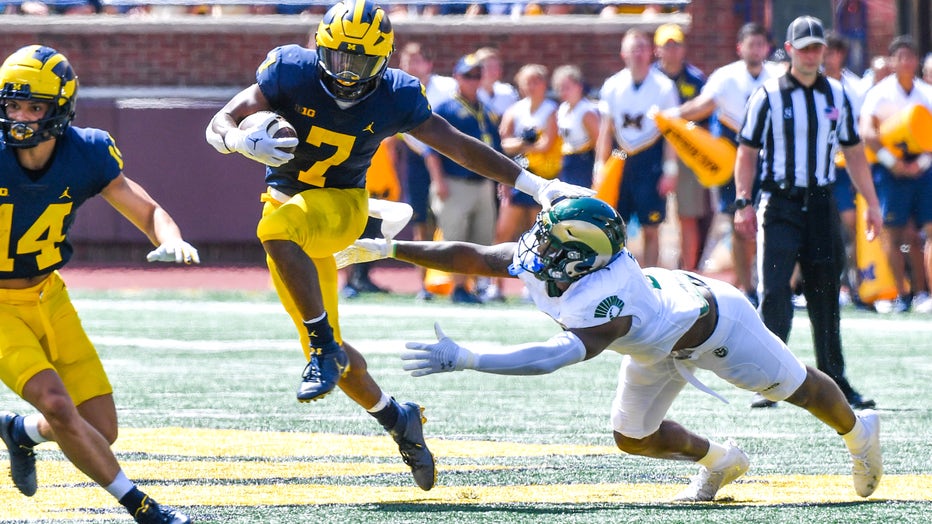 ANN ARBOR, MICHIGAN - SEPTEMBER 03: Donovan Edwards #7 of the Michigan Wolverines avoids a tackle by a Colorado State Rams defender during the first half of a college football game at Michigan Stadium on September 03, 2022 in Ann Arbor, Michigan. (Ph

"I would definitely say it’s pretty unusual," said McNamara, sounding surly. "It was kind of a thing that I wasn’t expecting. By the end of camp, I thought I had my best camp and put myself in a good position."

When it was relayed to Harbaugh that McNamara was not happy, he didn’t seem to be concerned.

"I don’t think I have to manage anything," Harbaugh said. "I just need to let them go out there and compete and do what they do."

McNamara began 1 of 5 and finished 9 of 18 for 136 yards, a total boosted by a short pass he threw that Roman Wilson turned into a 61-yard touchdown early in the first quarter. With McNamara under center, the Wolverines stalled at the Rams 13, 8 and 16 and settled for field goals in the first half that ended with them ahead 23-0.

"I thought he had a really good game," Harbaugh said.

McCarthy made the most of his limited opportunity to play — running for a 20-yard score and going 4 of 4 for 30 yards through the air — and his coach was quick to praise his play.

"He was electric when he got in," Harbaugh said. "There’s no question about that. He also went through his reads very well. He was super cool, calm and collected."

Michigan’s defense, which had seven sacks and an interception, contributed to the flurry of scores with DJ Turner’s 45-yard touchdown off a fumble recovery early in the third.

"It’s a little bit of too much, too soon for us to be able to face a team of this quality this early," coach Jay Norvell said after his Colorado State debut.

The Rams avoided getting shutout midway through the fourth quarter when Clay Millen lofted a 34-yard pass that Tory Horton caught in the end zone to make it 44-7.

Millen, a redshirt freshman, was 16 of 20 for 137 yards with a touchdown and an interception.

"Clay took care of the ball offensively, for the most part," Norvell said. "He had one bad read. For a guy playing his first game I thought he did a lot of good things."

Colorado State: Norvell, a former Nevada coach, has a lot of work to do with his Mountain West Conference team.

"Overall, I’m not discouraged about our guys at all," he said. "This is a good football team. They’re pretty different than everybody on our schedule."

Norvell’s No. 1 task may be to improve how his team protects Millen, who was often pressured when he wasn’t sacked.

Michigan: Harbaugh chose a unique way to handle his quarterbacks, giving both a chance to start over the first two weeks. McCarthy seems set up to keep the job if he flourishes against Hawaii.

"I’ve known McNamara a long time," Norvell said. "He’s from Reno (Nevada). No. 9 (McCarthy) is athletic. He goes in there and runs the zone read and keeps the drive alive. He’s different. I’ll let Jimmy worry about that."

The Wolverines may stay where they are in the AP Top 25 after doing what was expected in a game they were favored to win by four-plus touchdowns.