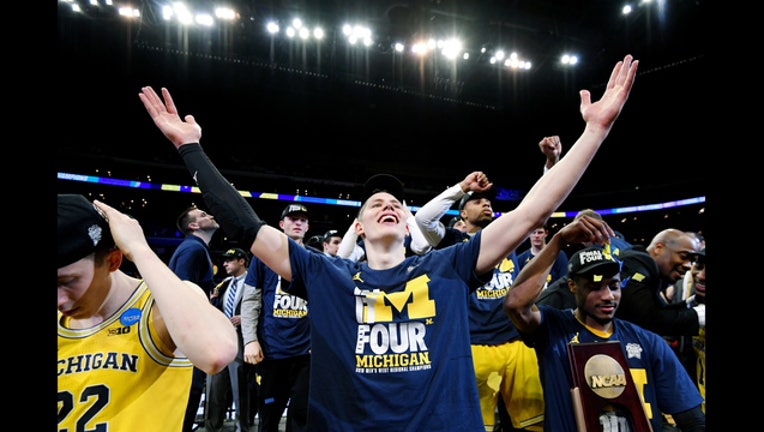 LOS ANGELES (AP) - Michigan is headed to its first Final Four in five years with another upset-minded opponent waiting.

The Wolverines (32-7) have tamped down three consecutive teams with designs on pulling surprises - No. 6 seed Houston, No. 7 Texas A&M and No. 9 Florida State.

Now they'll face the most improbable opponent of all - 11th-seeded Loyola-Chicago in San Antonio.

"I don't think any of us cares about rankings, seedings or none of that," forward Moe Wagner said. "It's about who is going to play better. They must be a really good team, that's why they're in the Final Four, and that's all that matters."

The third-seeded Wolverines withstood their own poor shooting to beat Florida State 58-54 and win the West Region title on Saturday night for their 13th straight victory. They haven't lost since Feb. 6 against Northwestern.

Loyola (32-5) made a stunning run through the South, beating Kansas State 78-62 in the regional final to equal the lowest-seeded team ever to reach the Final Four.

The Ramblers have Sister Jean, too. Their 98-year-old team chaplain, Sister Jean Dolores Schmidt, has been a social media and TV sensation during the tournament.

Not that West Regional Most Valuable Player Charles Matthews had a clue.

"I don't know who Sister Jean is, no disrespect," he said.

Not so for Wagner, the 6-foot-11 forward plucked out of Germany by coach John Beilein.

"I know that she didn't have Loyola-Chicago in the Elite Eight," Wagner said. "I know that."

Wolverines forward Isaiah Livers knows one of Loyola's players, having played AAU basketball against each other in Chicago.

"I've been watching them. They're a really good team," he said. "From now on, you're going to play nothing but good teams. They're here for a reason."

So are the Wolverines, whose NCAA Tournament victories have involved wild swings.

They scored 99 points in the regional semifinal and 58 in the final, a 41-point swing that is the largest two-game scoring difference by any team in this year's tournament.

After beating No. 14 Montana by 14 points in the first round, Michigan escaped by 1 against Houston on Jordan Poole's 3-pointer at the buzzer.

The Wolverines trounced Texas A&M by 27 points in the regional semifinals, hitting 10 of their 14 3-pointers in the first half.

Michigan got into a close one against the Seminoles, clinging to a 55-52 lead with 1:14 remaining. The Wolverines made 3 of 5 free throws in the closing seconds to hang on for their school-record 32nd win.

"I feel like we all believe in one another, but that is the special thing about this group of guys," Matthews said. "We just take everything one day at a time and we stay connected through it all. When you have guys like that who are truly your brothers, anything's possible."

After playing in front of 19,665 mostly pro-Michigan fans in Los Angeles, the Wolverines can likely expect much of the country to be rooting against them in San Antonio.