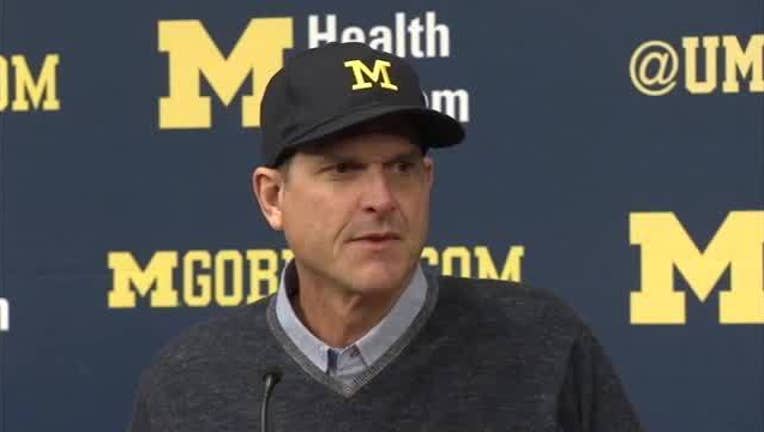 (WJBK/AP) - The College Football Playoff committee announced Sunday that #7 Michigan (10-2) will head to the Peach Bowl in Atlanta to play #10 Florida (9-3) on December 29th at noon at Mercedes-Benz Stadium.

The head coach of Florida in those games was Jim McElwain who is the current wide receivers coach at Michigan and will be named the next head coach at Central Michigan on Monday.

This game will match two strong defensive teams. Michigan, despite giving up 567 yards to Ohio State, still ranks No. 1 in total defense. Led by linemen Rashan Gary and Chase Winovich and linebacker Devin Bush, the Wolverines held eight opponents under 300 yards and five to 10 points or fewer.

Florida's Jachai Polite and Jabari Zuniga have combined for 16 1/2 sacks and 27 tackles for loss after combining for six sacks and 13 1/2 TFLs in 2017.

Michigan bounced back from a 24-17 season-opening loss at Notre Dame to win 10 straight, beating three straight ranked opponents in Wisconsin, Michigan State and Penn State. Karan Higdon rushed for more than 1,000 yards and Shea Patterson has thrown for 21 touchdowns against six interceptions.

The Gators' season highlight was the 27-19 win over then-No. 5 LSU in Gainesville on Oct. 6, a week after they went on the road and beat then-No. 23 Mississippi State.

They dropped back-to-back games to Georgia and Missouri before closing the regular season with three straight wins.

Feleipe Franks, benched in the third quarter against Missouri, rallied the Gators from 17 points down in the second half to beat South Carolina the next week. He's completed 58 percent of his passes for 2,284 yards with 23 touchdowns against six interceptions.

Lamical Perine and Jordan Scarlett have combined for more than 1,400 yards rushing and 10 touchdowns.

Michigan is 4-0 all-time against the Gators and it is Michigan's first appearance in the Peach Bowl.

Harbaugh said he wasn't concerned about the possibility of his team allowing the devastating loss to Ohio State to lead to an emotional letdown for the bowl.

A win would give Florida a 10th win in a season for the 15th time and first since 2015. Mullen would become the 11th coach in SEC history to win 10 games in his first season, and he would join Auburn's Gus Malzahn (2013) as the only other coach to do it after inheriting a team that won fewer than five games the year prior to his arrival.

The Gators' best win was 27-19 over then-No. 5 LSU in Gainesville on Oct. 6, a week after they went on the road and beat then-No. 23 Mississippi State.

Michigan defensive lineman Rashan Gary, who announced last week he would declare for the NFL draft, will not play in the bowl, Harbaugh said.

Gary was the nation's No. 1 recruit in 2016, and he is projected to be an early draft pick. A shoulder problem limited him to nine games this season.

Offensive analyst Ben McDaniels will coach the receivers in place of McElwain. McDaniels was offensive coordinator at Rutgers in 2015 and was an analyst for the Chicago Bears for two years before joining the Wolverines staff.