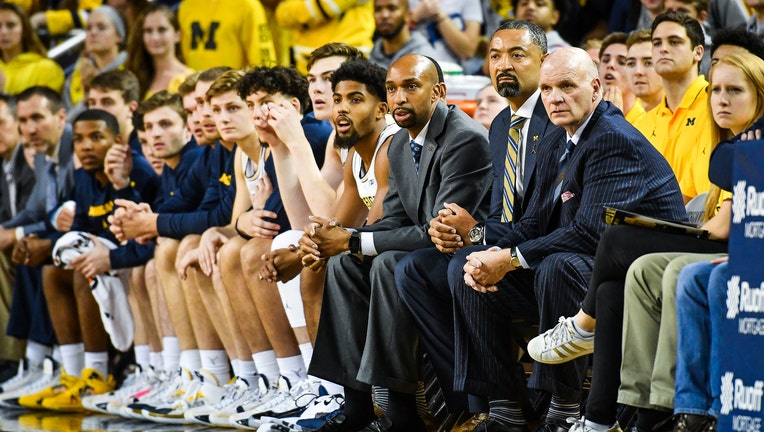 Jalen Rose was at Crisler Center and received a nice ovation when he was introduced on the video board. In fact, the whole Fab Five is taking an interest in Howard's success.

"Jimmy King was here tonight too," Howard said. "The brotherhood that we have for one another, it will never ever go anywhere. For example, Chris Webber texted me to wish me luck. ... Ray Jackson, he wanted to be here."

Howard's debut on the Michigan sideline was a success Tuesday night. Jon Teske had 17 points and 13 rebounds, and the Wolverines held off Appalachian State 79-71. It wasn't always pretty for Michigan, which nearly blew a 30-point lead in the second half, but Howard's team persevered in its first game since he replaced John Beilein this past offseason.

Howard returned to the school he helped reach two Final Fours as a player, taking over as coach after Beilein left for the NBA. Howard was welcomed warmly by the home fans, and when Rose appeared on the screen, Howard took a moment to clap along with the crowd. He said he didn't know Rose would be there.

"He has a big schedule," Howard said, referring to Rose's ESPN commitments. "That's tough. I really appreciate the fact that he took time out of his schedule, not only to come, but he also brought his mom."

Everyone seemed to go right for the Wolverines for the game's first 30 minutes or so. Teske scored Michigan's first 11 points, and the 7-foot-1 senior had a double-double well before halftime.

Michigan led 67-37 with about 13 minutes remaining, then Appalachian State went on a 30-5 run. A 3-pointer by Adrian Delph cut the lead to five with 38.8 seconds left, but the Mountaineers couldn't complete the comeback.

"You kind of expect us to hit a bump," Michigan guard Eli Brooks said. "Not everything's going to go smoothly, especially the first game. New coach, new system, so it's to be expected. Just moving forward, next-play mentality."

This was the first meeting in men's basketball between these two schools, and there would be no repeat of Appalachian State's football upset against Michigan in 2007. Justin Forrest scored 27 points for the Mountaineers, but he was their only player in double figures.

Appalachian State: The Mountaineers have a new coach too in Dustin Kerns. They certainly didn't give up after falling way behind, but Appalachian State never led in the game and needed some poor free throw shooting by Michigan to make it close.

Michigan: Beilein's teams played a distinctive style, keeping the pace manageable, shooting a lot of 3-pointers and committing few turnovers or fouls. It won't be a surprise if the Wolverines take a different approach under Howard, but it's hard to draw too many conclusions from this first game. Michigan turned the ball over 17 times, which is cause for concern, and the game obviously ended up being closer than it needed to be.

"In a situation like that, when you're facing adversity, the best thing that our group did was they stayed together, they stayed connected," Howard said. "One thing that I did not want our team to do is start overanalyzing every possession in their head, putting their heads down. We have to figure it out as a group."