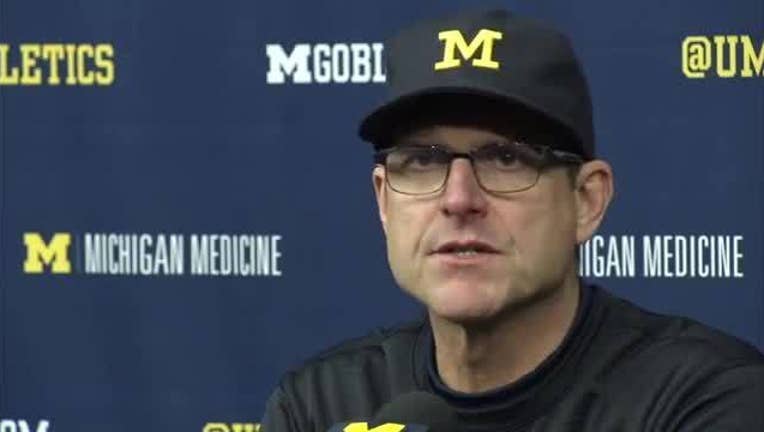 PARIS (AP) - Michigan's football team gathered for a group shot atop Pont des Arts overlooking the Seine River after witnessing history in Normandy and getting an up-close look art in the Louvre.

"He said, '30 years from now you (might not) remember some games you won or lost but you'll remember being in Paris with your buddies,'" Harbaugh recalled Selzer saying. "I think I'll remember them all. The wins. I'll remember the losses. There will be some I'd like to forget, but I think he's right."

A year after making a trip to Rome , Harbaugh and the Wolverines continued what he insists will be an annual tradition of making a spring trip abroad as a way to expand his team's world view. This year's trip to France was once again funded by Michigan donors.

Harbaugh said Michigan alums Bobby Kotick and Don Graham funded the team's trip this year and Kotick paid for the visit to Italy. The coach said Kotick, CEO of Activision Blizzard, is willing to fund these trips as long as Harbaugh wants to do them. With the Paris trip set to conclude Thursday, Harbaugh already has a list of possible destinations planned for next year: South Africa, Greece, Spain and Cuba.

"These trips kind of (have) to do with the reflection of why we came to (college) in the first place," Michigan defensive end Chase Winovich said. "To be well-rounded human beings and the best possible people we can be. Those aspects will carry over for us later in life."

Michigan's seven-day trip to Paris didn't feature any football because the Wolverines wrapped up spring ball last week. But the visit did begin with some notable football news because junior quarterback Shea Patterson was officially declared eligible for the 2018 season by the NCAA on Friday, getting a waiver to play this fall after transferring from Ole Miss.

Patterson learned about the news just hours before boarding a plane for France with the rest of his teammates.

The former five-star recruit and No. 1-ranked quarterback in the class of 2016 won his eligibility after claiming Ole Miss, notably former head coach Hugh Freeze, misled him about the scope of violations that ultimately led to a two-year bowl ban. Patterson woke up Saturday morning in Paris with a clear head for the first time in four months.

"It's been a long time coming and I'm just thankful that it's over with," Patterson said. "We get to move forward and just focus on playing football."

After hosting a football clinic, Michigan visited the Louvre and later went to Normandy for a moving, powerful experience at the site of World War II's D-Day landings in 1944. The Wolverines toured the Memorial de Caen museum, walked near the edge of the bank of the English Channel and eventually made their way to the American Cemetery in Normandy.

Grant Newsome and Ben Bredeson placed a Michigan-themed wreath at the foot of the Spirit of American Youth Rising From the Waves sculpture inside the burial ground during a humbling anthem ceremony. Players and coaches went on to see the thousands of grave sites for American soldiers who lost their lives.

"(This is what) family is all about," Jack Harbaugh said through tears, standing next to his son, Jim, inside the memorial. "It's one of those great moments to share with family."

Michigan's players and coaches enjoyed many other moments, including paying paintball to helping the homeless and visiting with refugees throughout the city.

"(It's) been great and that seems unanimous from everyone on this trip," Harbaugh said. "You can't put a value on this."