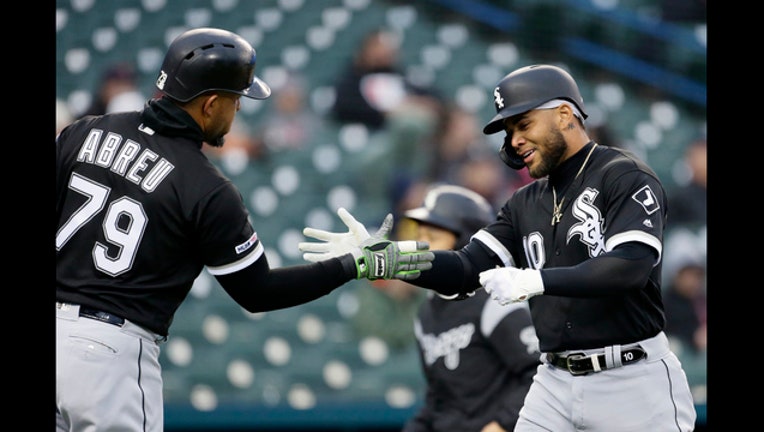 DETROIT (AP) - It was a big night for the bench coaches at Comerica Park.

With both managers gone because of a suspension and an ejection, Joe McEwing and Steve Liddle guided their teams through the late innings Friday night. McEwing's Chicago White Sox ultimately won, beating Liddle's Detroit Tigers 7-3.

"It was a real good team win, all the way around," McEwing said, deflecting credit afterward.

McEwing at least had some advance notice that he'd be taking over managerial duties. The White Sox were without manager Rick Renteria and shortstop Tim Anderson. Those two were serving suspensions for their actions during Wednesday's bench-clearing fracas against Kansas City.

Liddle, on the other hand, took over in the top of the fifth after Tigers manager Ron Gardenhire was ejected.

Yoan Moncada hit a mammoth home run in the first inning for Chicago, which eventually broke the game open with five runs in the seventh. Carlos Rodon (3-2) allowed a run and three hits in six innings for the White Sox.

Gardenhire was tossed in the fifth for having words with plate umpire Todd Tichenor after Tigers starter Jordan Zimmermann (0-3) walked in a run to give the White Sox a 2-1 lead.

"Gardy wasn't out there talking about the color of the bathroom drapes," Liddle said. "He was just kind of protecting his player. And that's what he's done. I've been around Gardy for a long time, he's been thrown out of a lot of games, and I'd say it's about 90 percent of the time it's because he's protecting the players."

Josh Harrison, Grayson Greiner and Niko Goodrum homered for Detroit's three runs, but it was Moncada's drive in the first that stood out. His home run , which may have had some help from the wind on a blustery night, carried beyond the two rows of bushes above the wall in center field. It went 458 feet, according to Statcast.

Zimmermann came into the game averaging the fewest walks per nine innings (1.91) of any active pitcher with at least 1,000 innings. He wasn't sharp enough on this night, though. He walked four, one shy of his career high, and allowed five runs in 6 1/3 innings.

"I was around the zone most of the night and a lot of borderline calls that other umpires would've gave me, and I can't live over the plate or I'll be gone in the first inning," Zimmermann said. "So I have to live on the corners and there was a lot of questionable calls tonight. He thought they were balls and I thought they were strikes. You know, he had a bad night."

Moncada drew a walk with the bases loaded in the fifth, and although Zimmermann looked frustrated and Gardenhire was thrown out of the game, a replay showed that ball four indeed appeared to miss the plate.

In the seventh, Zimmermann was pulled after allowing a two-run single to Leury Garcia. Jose Abreu added a two-run double off reliever Daniel Stumpf to make it 6-1, and Yonder Alonso followed with an RBI single.

Greiner's homer in the bottom of the seventh was the first of his career, and Goodrum added a solo shot in the ninth.

Moncada's home run was his sixth of the season, to go along with a .321 average.

"He's doing things that we all knew that he can do, but it's now, when he has the chance to display all the things he can do well - amazing," Abreu said through a translator.

Tigers: Harrison, who was hit in the left hand by a pitch in Thursday's game, was in the lineup and homered for the first time this season.

Tigers: LHP Daniel Norris (0-0) makes his first start of the season. He's in the rotation now because of a season-ending injury to Matt Moore.