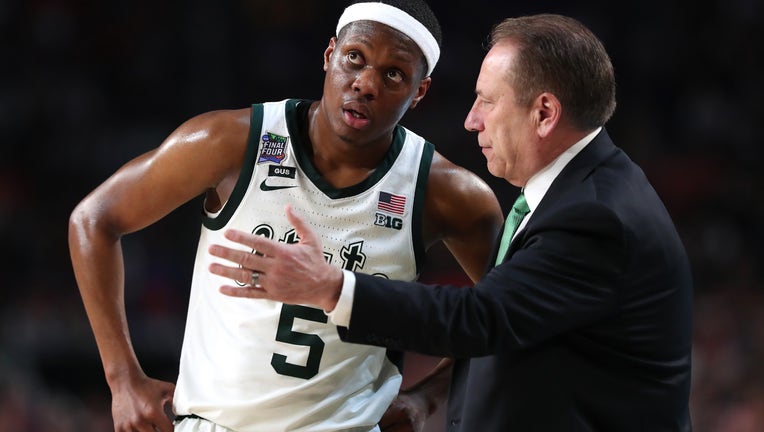 MINNEAPOLIS, MINNESOTA - APRIL 06: Head coach Tom Izzo of the Michigan State Spartans talks with Cassius Winston #5 in the second half against the Texas Tech Red Raiders during the 2019 NCAA Final Four semifinal at U.S. Bank Stadium on April 6, 2019

ROSEMONT, Ill. - Michigan State coach Tom Izzo had little doubt All-America guard Cassius Winston would return for his senior season rather than jump to the NBA. And it wasn’t just because he needed another year of college ball.

“No. 1, I know enough people in the NBA that kind of know where they thought he was,” Izzo said Wednesday at Big Ten media day. “No. 2, he’s got a mother that thinks he should get his master’s done and probably his doctorate started. And I’m dead serious on that. That wasn’t flying so good.”

Winston comes into this season on quite a high.

A unanimous pick for Big Ten Preseason Player of the Year by the media, he leads a team considered a favorite to contend for the NCAA championship. The Spartans won the Big Ten regular-season and conference tournaments on the way to the Final Four last season. Winston averaged 18.8 points while setting a conference record with single-season record with 291 assists.

“It’s kind of sweet, it’s kind of fun, being the top dog a little bit,” he said about the expectations on the Spartans.

Nebraska went all out with Husker Hoops last week. A packed house at Pinnacle Bank Arena was on hand to watch a scrimmage, see a new floor unveiled and hear new coach Fred Hoiberg speak. To close it out, hip hop star Rick Ross put on a performance.

“I have a pacemaker. The bass was so loud, I thought my pacemaker was going to explode,” said Hoiberg, the former Iowa State and Chicago Bulls coach. “Our guys loved it, they were up on stage with him, and really overall it was a great night for our team.”

The event was part of a big weekend in Lincoln, with ESPN’s “College GameDay” in town for the football game against Ohio State on Saturday night. The Buckeyes blew out the Cornhuskers 48-7.

The NCAA is moving the 3-point line back from 20 feet, 9 inches to 22-1 ¾, matching the international distance.

Purdue coach Matt Painter said natural outside shooters probably won’t notice much of a difference. But for players trying to develop a 3-point shot, it might be a little more difficult.

“I think the guys that can make 3’s, it’s not going to bother (them) much,” Painter said. “And the guys that are trying to be 3-point shooters, it’s really going to bother. We have a couple guys that are working toward trying to make 3’s now. That made it really hard for them. But the guys that already shoot 3’s, that walk on campus and that’s the reason they’re there ... the line doesn’t affect (them). But it will affect guys trying to do that. As the season progresses and you look at guys’ percentages, I think you can end up seeing for certain teams people really packing it in and making you earn from the 3-point line.”

Josh Langford has been practicing just about every day for Michigan State. The question for Izzo is how soon he can perform the way he was prior to his ankle injury last season.

“It’s just the unknown of how long it’ll take to get him back to where he was playing last November, December, and part of January before he got hurt,” he said. “And I think he’s a key guy for us because at 6’5” he can really shoot it.”

Langford was averaging 15 points in 13 games when he was injured in Michigan State’s final nonconference game on Dec. 29 against Northern Illinois. Not until a month later was it determined the 6-foot-6 junior from Huntsville, Alabama, was done for the season.

Northwestern coach Chris Collins recalled being a ball boy for the team his dad, Doug, was coaching way back when. And it wasn’t the Chicago Bulls. Doug Collins was actually an assistant at the University of Pennsylvania. The backcourt was current Iowa coach Fran McCaffery and new Big Ten Commissioner Kevin Warren.