NEWARK, N.J. - A day after being embarrassed in a one-sided loss to the Pittsburgh Penguins, the Detroit Red Wings bounced back with one of their best defensive games of the season.

Alex Nedeljkovic had 17 saves, Oskar Sundqvist and Tyler Bertuzzi each had a goal and assist and the Red Wings beat the New Jersey Devils 3-0 on Sunday.

"Some things were said in the room after the game yesterday," Nedeljkovic said of the 7-2 loss to the Penguins. "We’ve had too many of those games where we ended up getting kind of blown out, and today I think was a big game for some guys to kind of rebound and right the ship in a way, myself included."

The 17 shots allowed were the second-fewest in a game this season for Red Wings, who limited Anaheim to 15 on Jan. 31 in a 2-1 victory. 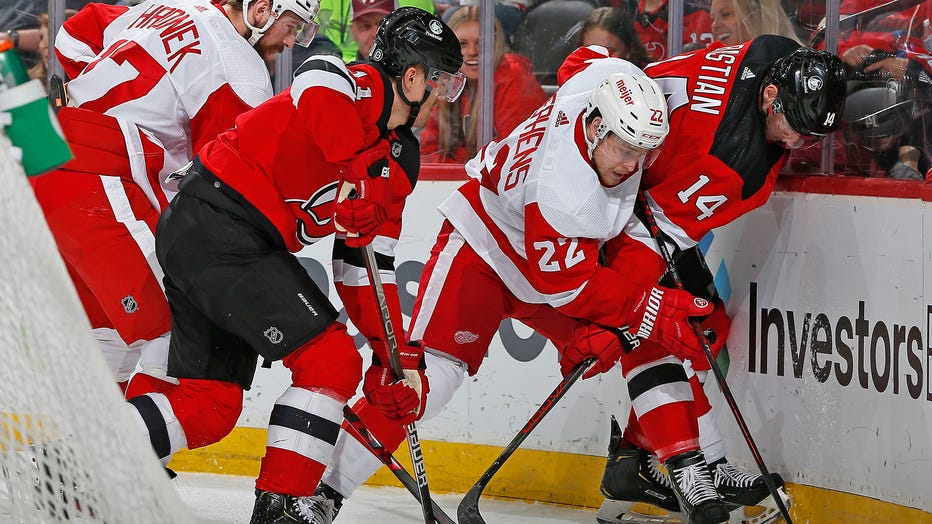 NEWARK, NJ - APRIL 24: Mitchell Stephens #22 of the Detroit Red Wings checks Nathan Bastian #14 of the New Jersey Devils as they play for possession of the puck during the third period at the Prudential Center on April 24, 2022 in Newark, New Jersey.

New Jersey played without captain Nico Hischier, who was ill. That left the Devils without their top two centers, with Jack Hughes out for the season.

"It’s frustrating, you know, you really want to feel good, but you know, sometimes that's just the way it is and you have to dig deep to get through the game," veteran forward Tomas Tatar said. "But like I said, I’m personally disappointed. I would expect more from us."

The shutout was fourth of the season for Nedeljkovic and it involved a little good luck and a good challenge by the Detroit bench.

Late in the second period, Devils forward Yegor Sharangovich took a bad-angle shot from the right corner that hit off the pad of a screened Nedeljkovic and went into the net, seemingly tying the game.

"They were kind of feeling it right there, but that happens; sometimes you get the bounces," said Nedeljkovic, who saw Devils forward Pavel Zacha miss the net on a third-period breakaway with the score still 1-0.

Detroit lost an apparent Adam Erne goal with 7:56 left when the officials decided the Red Wings forward interfered with Hammond on a shot by Danny DeKeyser.

Sundqvist opened the scoring with 4:12 left in the first period on a bang-bang play. Bertuzzi poked the puck off the stick of Devils forward Andreas Johnsson in the corner and it rolled right to Sundqvist for a quick shot that beat a startled Hammond.

Devils: At Ottawa on Tuesday.