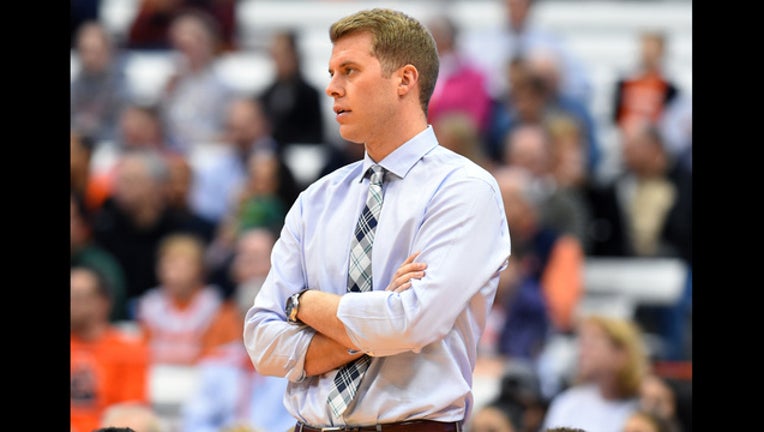 SYRACUSE, NY - NOVEMBER 02: Head coach Patrick Beilein of the Le Moyne Dolphins looks on from the bench against the Syracuse Orange during the first half at the Carrier Dome on November 2, 2015. (Photo by Rich Barnes/Getty Images)

The 36-year-old son of Michigan coach John Beilein was hired on Thursday to take over at Niagara University. Patrick Beilein spent the past four seasons at Division II Le Moyne, where he had a 77-41 record.

Le Moyne qualified for the NCAA Tournament in each of its past three seasons and made its first appearance in the quarterfinals a year ago.

"His credentials as a coach and as a leader make him the ideal candidate to lead the Purple Eagles," school president James Maher said.

The switch is similar to the one his father took in the early 1990s. John Beilein also coached at Le Moyne, and then spent five years at Canisius, a Buffalo-based MAAC school that is Niagara's western New York regional rival.

Beilein inherits a Purple Eagles team that went 64-129 and failed to advance past the MAAC Tournament quarterfinals in six seasons under Chris Casey, who was fired this month.

In thanking Maher and athletic director Simon Gray, Beilein said: "They have showed great faith and confidence in my ability to rebuild this program."

Beilein's hiring comes while he is in Anaheim, California, where the West Region's second-seed Michigan prepares to face Texas Tech in the round of 16 of the NCAA Tournament.

Beilein started coaching for his father as a graduate assistant at Michigan from 2008-10. He also coached Division II West Virginia Wesley College and was an assistant at Bradley and Dartmouth. He worked as a player development coach for the NBA Utah Jazz.