The Wolverines (11-0, 8-0 Big Ten, No. 3 CFP) played much of the second half without star running back Blake Corum, who grabbed his left knee after being tackled just before halftime.

Michigan will now turn all its attention to playing rival and second-ranked Ohio State on the road, where they have not won since 2000 with a spot in the Big Ten champinship game and likely in the College Football Playoff at stake. 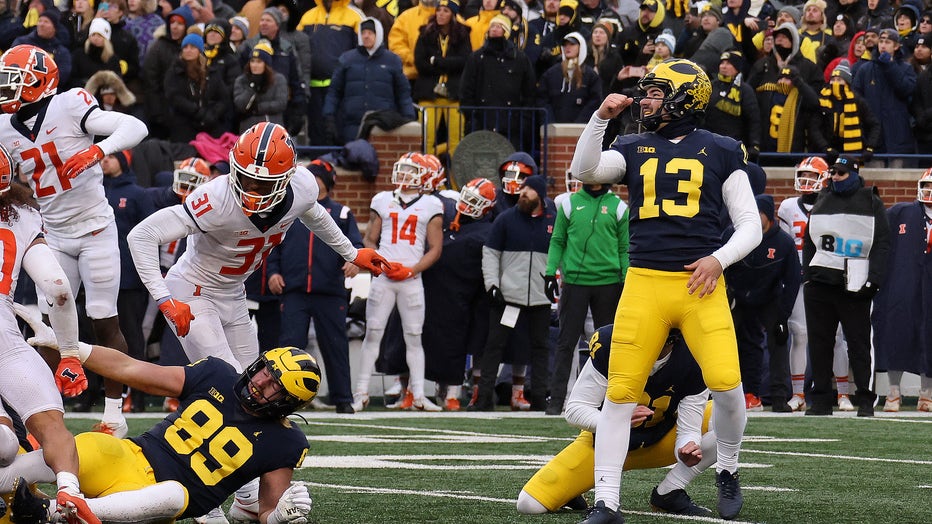 The Fighting Illini (7-4, 5-3) took a 17-10 lead late in the third quarter on Chase Brown's 37-yard touchdown run. With a chance to run out the clock, they had to punt to Michigan late in the game and failed to hold on and beat a top-three team for the first time since knocking off top-ranked Ohio State in 2007.

Brown finished with 140 yards rushing and two scores on 29 carries.

With Corum out and the passing game off, the Wolverines had to settle for Moody making four field goals in the second half.

Corum had 108 yards rushing and his 19th touchdown this season on 18 carries with only one rushing attempt in the second half. The Heisman Trophy hopeful has 100 yards rushing in eight straight games, tying the school record with current running backs coach Mike Hart, who set the mark in 2007.

Illinois quarterback Tommy DeVito, a Syracuse transfer, was 21 of 30 for 178 yards.

Illinois coach Bret Bielema led his team two days after the death of his mother, Marilyn.

The Wolverines went into the game missing defensive end Mike Morris, who has a team-high 7 1/2 sacks, and dual-threat running back Donovan Edwards due to undisclosed injuries.

Illinois' No. 3 receiver, Pat Bryant, missed the game with a concussion.

Illinois: After losing two straight games to Purdue and Michigan State, Bielema had his team prepared to play and made in-game adjustments to make the game much closer than expected.

Michigan: If Corum can't play or is limited against the Buckeyes, his teammates will have a hard time winning next week.

Michigan: Plays at Ohio State, where its last win was in 2000.