The Wolverines (8-0, 5-0 Big Ten) scored 26 straight points after falling behind briefly late in the first quarter.

The Spartans (3-5, 1-4) went 0 for 2 on fourth down in the first half. They turned it over on downs after a review of a spot and after coach Mel Tucker chose to go for it instead of kicking a short field goal to tie the game midway through the second quarter.

Michigan led 13-7 at halftime and kept control in the second half, outgaining Michigan State 133-8 in the third quarter. 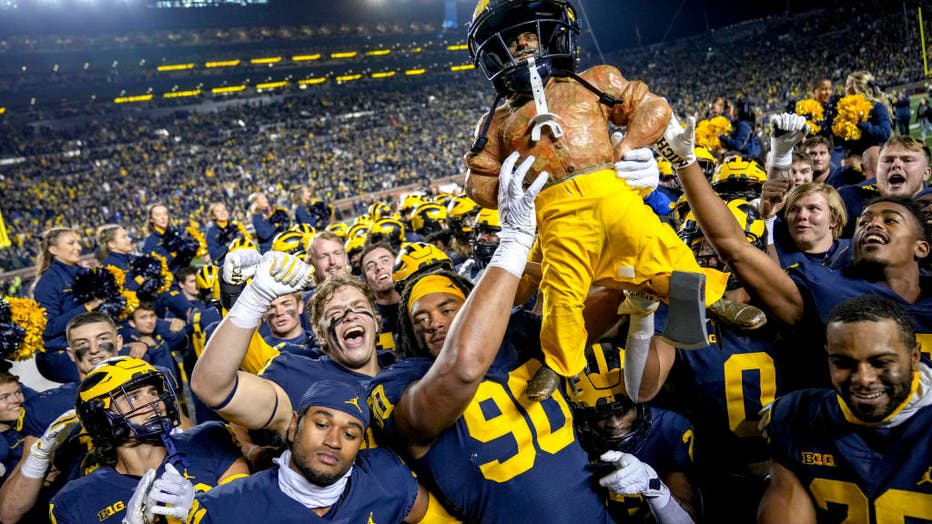 Moody, the reigning Lou Groza Award winner given to the nation's top place kicker, made a career-long 54-yarder for his fifth field goal to put the Wolverines ahead 22-7 early in the fourth.

Corum, who started the game with an FBS-high 13 touchdowns, scored for a second time on a 4-yard run after Michigan State had trouble with a snap on a punt.

With a 29-7 lead in the final minutes, coach Jim Harbaugh showed no mercy against his in-state rival by calling for J.J. McCarthy to throw deep down the field.

Payton Thorne was 17 of 30 for 215 yards with a 26-yard touchdown pass to Keon Coleman that gave the Spartans a 7-3 lead late in the first quarter. Thorne also threw an interception late in the game.

Coleman finished with five catches for 155 yards and a score.

Michigan State: Mistakes were costly in a game the Spartans had to be nearly flawless to win, starting with offensive tackle Jarrett Horst drawing an unsportsmanlike conduct penalty to stunt the opening drive.

Michigan: Harbaugh's team stayed on track for its showdown in less than a month on the road against second-ranked Ohio State, with the winner potentially representing the Big Ten in the College Football Playoff.

Michigan will likely keep its spot at No. 4 in

Michigan State: Plays No. 17 Illinois on the road, hosts Rutgers and Indiana, and closes the regular season at No. 13 Penn State, needing to win three of four games to be bowl eligible.

Michigan: Travels to face Rutgers, hosts Nebraska and No. 17 Illinois, and plays the Buckeyes on Nov. 26 on the road.