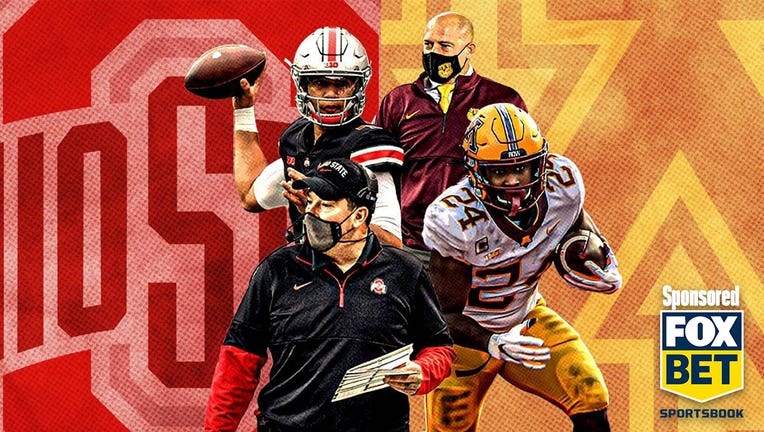 Week 1 of the college football season features an early blockbuster matchup on Thursday in the Big Ten.

The reigning conference champions, the No. 4 Ohio State Buckeyes, will take on the Minnesota Golden Gophers at Huntington Bank Stadium in Minneapolis, live on FOX at 7:30 p.m. ET.

For more up-to-date news on all things Buckeyes, click here to register for alerts on the FOX Sports app!

Coming off the heels of a busy Week 0, what will this big bout have in store?

Here's everything you need to know about Ohio State vs. Minnesota.

Which team is favored?

The runners-up in last season's College Football Playoff National Championship, the Buckeyes are two-touchdown favorites over their division rivals, according to FOX Bet's insights.

For more on this matchup, check out Sam Panayotovich's full breakdown.

Enter the College Football Challenge contest on the FOX Super 6 app for free, and you can win this week’s $10,000 jackpot! Download now at foxsuper6.com!

How can I watch?

Coverage of Ohio State vs. Minnesota begins at 7:30 p.m. ET Thursday on FOX.

Those looking to stream the game at home or on the go can watch via the FOX Sports app, FOXSports.com or through additional streaming devices upon authentication.

Which players should I keep an eye on?

With Justin Fields now suiting up for the Chicago Bears, Buckeyes head coach Ryan Day is turning to a new face under center: C.J. Stroud.

A redshirt freshman, Stroud was the No. 3 quarterback in the 2020 class, behind Alabama's Bryce Young and Clemson's D.J. Uiagalelei.

The 6-foot-3, 218-pound Stroud will have plenty of weapons at his disposal. The Buckeyes return seven starters on offense, wideout Chris Olave among them. He boasts 19 receiving touchdowns the past two seasons, the most in the Big Ten. Joining Stroud in the backfield will be running back Master Teague, who ran for 514 yards and eight touchdowns on 104 rushing attempts a season ago.

Speaking of running backs, the Gophers possess one of the conference's best in Mohamed Ibrahim.

Last season, Ibrahim was the only player in the Football Bowl Subdivision with 100-plus rushing yards in every game. He led the Big Ten in rushing yards and touchdowns, with 1,076 and 15, respectively.

For more up-to-date news on all things Golden Gophers, click here to register for alerts on the FOX Sports app!

Any other cool nuggets to know?

Historically, both all time and recently, this is a rather one-sided affair. The Buckeyes lead the series 45-7 and have won 11 straight against the Gophers.

Perhaps surprisingly, the most recent win for Minnesota took place away from home, with a 29-17 triumph in Columbus on Oct. 14, 2000. The Gophers haven't beaten Ohio State in Minneapolis since Nov. 7, 1981. Since then, it has been a 13-game losing streak in home clashes with Ohio State.

For more up-to-date news on all things college football, click here to register for alerts on the FOX Sports app!