The Pacers dropped their first two games of the season at home this week.

Mathurin, a 20-year-old Canadian forward selected sixth overall, made the three 3-pointers in a 2:20 span as the Pacers surged to an 88-79 lead after three quarters. Indiana outscored Detroit 36-23 in the quarter to erase a four-point halftime deficit.

Mathurin’s fifth and final 3-pointer pushed Indiana ahead 108-97 with 3:57 remaining. The sixth-man boosted the Pacers' edge in bench scoring to 58-29. 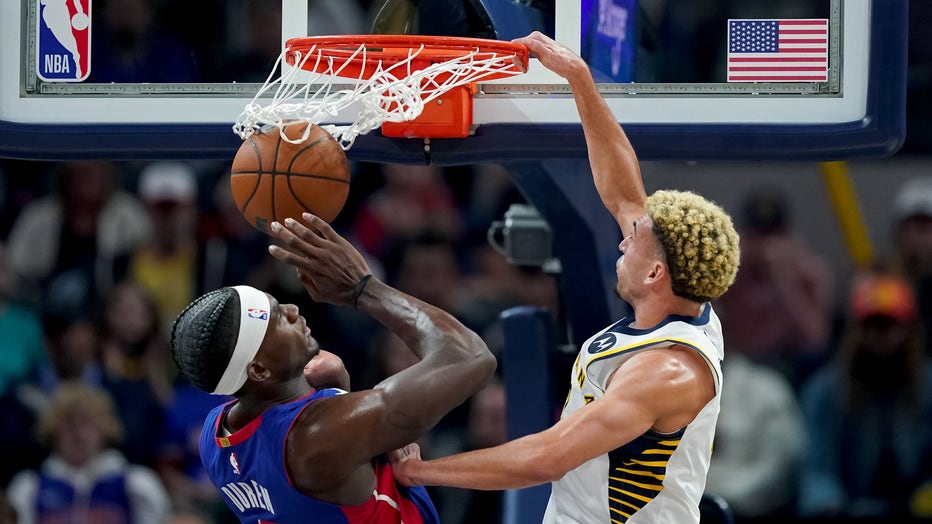 INDIANAPOLIS, INDIANA - OCTOBER 22: Chris Duarte #3 of the Indiana Pacers dunks the ball past Jalen Duren #0 of the Detroit Pistons in the third quarter at Gainbridge Fieldhouse on October 22, 2022 in Indianapolis, Indiana. NOTE TO USER: User express

Pacers point guard Tyrese Haliburton scored 24 points and provided clutch plays on three consecutive possessions in the final minutes. He made 3-pointers on back-to-back possessions then fed Aaron Nesmith for another basket from beyond the arc to give Indiana its largest lead at 117-105 with 1:21 remaining.

Jalen Smith added 19 points and 15 rebounds for the Pacers.

The Pistons led by 14 points in the opening quarter before the Pacers rallied in the second quarter to cut it to 56-52 at the break. Indiana benefited from 32 bench points, 14 more than Detroit, in the first half.

Pacers: Have trailed by double digits after the first quarter in all three games and allowed an average of 35.6 points. ... Took first lead of the season when Mathurin hit a 3-pointer for a 42-41 advantage with 6:30 remaining in the second quarter. ... C Myles Turner (left ankle sprain) has yet to make his season debut after landing on the foot of a ball boy during warmups before Wednesday's season opener.

Pistons rookie shooting guard Jaden Ivey had 17 points, 11 rebounds and five assists in returning to his Hoosier home state. He was doubled over in pain after taking a shot to the abdomen on an inside drive in the third quarter, but didn't come out of the game. The fifth overall pick was born in South Bend, went to high school in Marian and was a star at Purdue, His mother, Niele, is Notre Dame's women's basketball coach.

Pistons: At Washington on Tuesday night.

Pacers: At Philadelphia on Monday night.