Boston - As well as the Bruins have played this season, one team that had consistently given them problems was the Red Wings.

It took three meetings, but Boston finally figured out how to solve its issues against the NHL’s cellar dwellers. 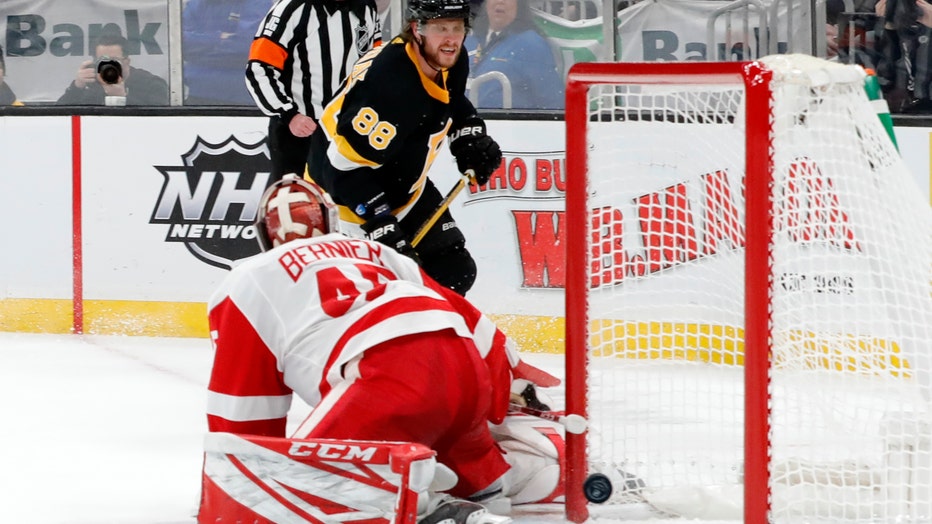 David Pastrnak scored his 42nd goal of the season Saturday to lead the Bruins past Detroit 4-1, giving Bruce Cassidy of the Bruins his 200th victory as an NHL coach.

Brad Marchand scored his 25th goal and assisted on Pastrnak's goal for Boston, which has won eight of its last nine games. Charlie McAvoy added a goal and an assist and Charlie Coyle had his 13th goal. Tuukka Rask finished with 25 saves to improve to 14-0-6 at home this season, tying the overall home points streak by a Bruins goaltender. Tiny Thompson started the 1929-30 season 20-0-0.

Darren Helm scored for the Red Wings, who have lost three straight and have the fewest points in the NHL. Jonathan Bernier finished with 37 saves.

Cassidy has 153 victories with Boston and 47 with the Washington Capitals.

Marchand said even when the Bruins fell behind 1-0 early, there was no panic.

“I don't think we were really worried about it,” Marchand said. “We had it tonight. We could tell. We came out so hard and we really controled the play the entire way through the game.”

The Bruins were outscored 7-3 in two losses to the Red Wings earlier this season. This time Boston was the aggressor from the outset, outshooting Detroit 41-26 for the game.

Though much like in the previous two meetings, the Bruins had trouble finishing off early offensive opportunities.

Boston was awarded the game's first power play when Gustav Lindstrom was sent to the penalty box for holding. Boston was on the attack when Helm swiped Torey Krug's pass near the blue line and started a 2-on-1 break. Krug backpedaled and tried to slow down Helm, but Helm was able to get his wrist shot past Rask to put the Red Wings in front 1-0.

Things changed in the second period when the Bruins needed less than five minutes to get three straight goals.

Boston came up empty on a 3-on-2 break when Marchand's shot was cleared back up the slot in the direction of a trailing McAvoy. He put it through a crowd and into the left corner of the net to tie the game.

Less than two minutes later, Bergeron put Boston in front when he took a feed from Marchand, cut inside Adam Erne and backhanded his shot by Bernier.

“We made it too easy for them,” Red Wings winger Frans Nielsen said. ““It's a good team, but they at least have to work for their chances.”

Boston struck again 2:10 later when Danton Heinen poked the puck out of a scrum behind the Red Wings' net and passed to McAvoy at the blue line. McAvoy fired a shot, which was deflected by Coyle into the net to make it 3-1.

“If you're losing to a certain team like we were losing to Washington for about six years, you gotta tie it up at some point,” Rask said. “Every game matters, so it's no different.”

NOTES: Rask is the sixth goaltender in NHL history with a home points streak of 20 or more games within a regular season. ... Jeremy Lauzon returned from a two-game suspension for a hit to the head last week of the Arizona Coyotes' Derek Stepan. ... Bruins winger David Krejci played in his 900th NHL game. ... Detroit's Mike Green played in his 300th game as a Red Wing.