No fans, no buzz — and not much to feel good about these days for either team. 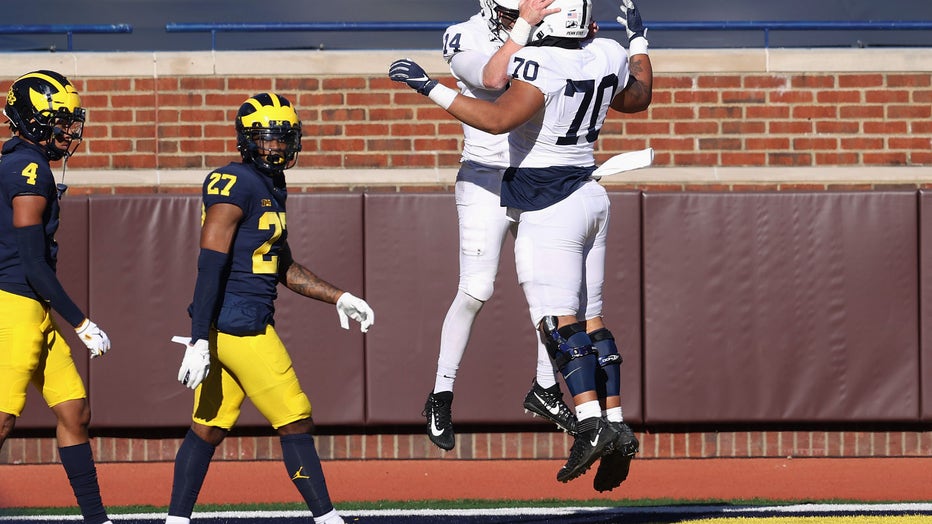 ANN ARBOR, MICHIGAN - NOVEMBER 28: Sean Clifford #14 of the Penn State Nittany Lions celebrates his first half touchdown with Juice Scruggs #70 next to Hunter Reynolds #27 of the Michigan Wolverines at Michigan Stadium on November 28, 2020 in Ann Arb

“We drive up to the Big House, and there's not a car on the road," Nittany Lions coach James Franklin said. "There's nobody giving you the middle finger on the ride up to the stadium like you normally get at every place. The parking lots are empty.”

What was also empty was Penn State's win column coming into Saturday's matchup, but that changed when the Nittany Lions beat Michigan 27-17. Penn State never trailed in this matchup of proud programs that have stumbled their way through this pandemic-shortened season.

Even if there had been a normal crowd at the game, it would have felt different with

“That was a battle of two very, very respected programs, in a very unique, challenging and weird year,” Franklin said.

Sean Clifford threw for 163 yards and scored one of Penn State's three rushing touchdowns. Keyvone Lee and Will Levis also ran for TDs. Hassan Haskins ran for 101 yards and two touchdowns for Michigan, but the Wolverines (2-4, 2-4) never found much of a consistent rhythm offensively.

It was the 899th victory for the Penn State program, and the Nittany Lions had to wait a while for this one. This was the first time they'd started a season 0-5, but three impressive touchdown drives were enough to hold off Michigan.

Penn State led 20-17 in the fourth quarter before producing a 12-play, 75-yard drive that ended with a 2-yard scoring run by Levis.

“We have to get better," Michigan defensive lineman Taylor Upshaw said. "There’s no excuse for missed tackles. We play football. We’ve been playing football. So when that’s happening, you gotta look in the mirror and say, 'Why are we missing tackles?’”

Cade McNamara, who came off the bench to guide Michigan to an overtime win at Rutgers last weekend, was off target for much of this game. He went 12 of 25 for 91 yards while dealing with shoulder problems.

Penn State marched 75 yards in 10 plays on the game's first drive, taking a 7-0 lead on a 6-yard run by Lee. That was about as smooth as it got for either offense, however.

Haskins broke free for a 59-yard run later in the first quarter, and he eventually scored from 2 yards out to tie the game.

Clifford was shaken up briefly in the first half, but after returning to the game he broke free for a 28-yard touchdown run to put the Nittany Lions back on top. A muffed punt gave Penn State a field goal just before halftime.

Michigan closed within three when Haskins scored on a 2-yard run with 13:12 remaining, but the Wolverines couldn't keep Penn State out of the end zone on the ensuing drive.

Penn State: This season went south for the Nittany Lions a while ago, but this was a solid effort. They've had to go deep into their depth chart at running back, but Lee ran for 134 yards in an impressive showing. The only major problem for Penn State was some bad penalties that helped Michigan hang around.

Michigan: McNamara and Joe Milton both played at quarterback, and neither could get anything going. The Wolverines were outplayed pretty much start to finish by a previously winless opponent.

“Hate losing," Michigan coach Jim Harbaugh said. "Respond by pressing on and attacking it. That’s the response from me and a bunch of our players. That’s our only choice.”

Clifford and Levis have both played at quarterback this year for Penn State, but Clifford was the clear pick Saturday. He was serviceable in the passing game and hurt Michigan with his legs as well.

“I know how hard this team works and I know how hard I work, so there's not one person or anybody who can tell me differently,” Clifford said. “I know the talent that we have, and I don't really care what anybody else has to say about it.”

Michigan went just 4 of 12 on third down despite an average distance to go of only 3.8 yards. The Wolverines were also stopped twice on fourth down.

Penn State is scheduled to play at Rutgers next weekend. Michigan hosts Maryland.