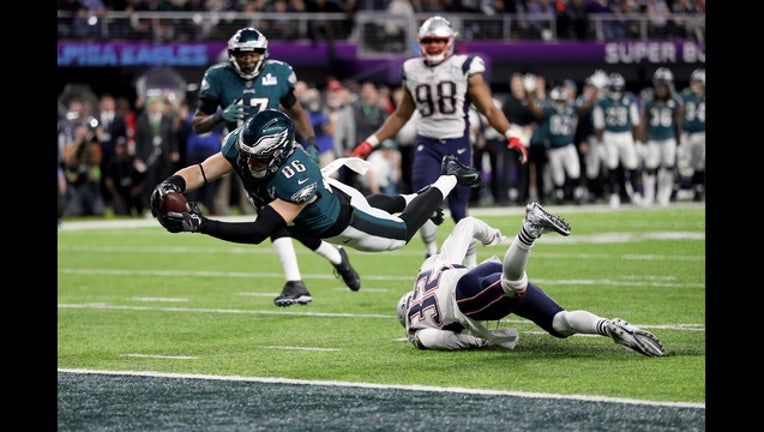 MINNEAPOLIS, MN - FEBRUARY 04: Zach Ertz #86 of the Philadelphia Eagles dives into the endzone for a 11-yard touchdown against the New England Patriots during the fourth quarter in Super Bowl LII. (Photo by Patrick Smith/Getty Images)

MINNEAPOLIS (AP) - Nick Foles went back-and-forth with Tom Brady and the defense came through with a turnover when they needed a stop.

The Philadelphia Eagles are Super Bowl champions for the first time in franchise history thanks to a backup quarterback who had another spectacular game and a strip-sack by Brandon Graham after the defense let Brady have his way for most of Sunday night.

Foles tossed an 11-yard touchdown pass to Zach Ertz with 2:21 left to give Philadelphia a 38-33 lead, but Brady had a chance to lead another comeback. He had thrown TD passes on three straight second-half possessions and picked the NFL's fourth-ranked defense apart to help New England overcome double-digit deficits.

But Graham pushed through a blocker, hit Brady, knocked the ball loose and rookie Derek Barnett recovered. The turnover - New England's first - led to a field goal that made it 41-33.

Brady and the Patriots had one final chance, starting from their 9 with 58 seconds left. But a desperation pass into the end zone fell incomplete and set off a wild celebration in a crowd filled with long-suffering Eagles fans who have desperately waited for a championship since 1960.