DETROIT - The Detroit Pistons swept the season series with Chicago in 2018-19. Now the Bulls are a win away from returning the favor.

Chicago can only hope that becomes relevant in a few months, if both teams are competing for a playoff spot. 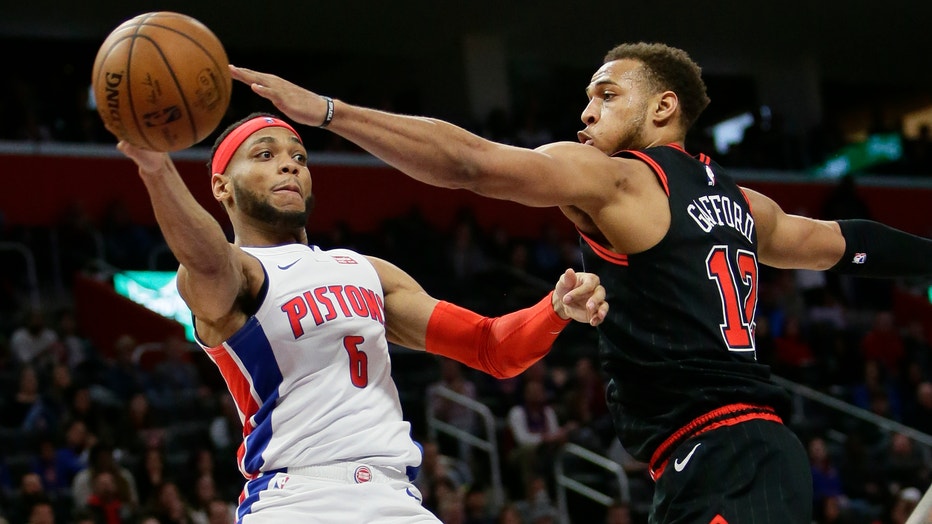 DETROIT, MI - DECEMBER 21: Bruce Brown #6 of the Detroit Pistons is forced to pass the ball against Daniel Gafford #12 of the Chicago Bulls during the second half at Little Caesars Arena on December 21, 2019, in Detroit, Michigan. The Bulls defeated

Zach LaVine scored 33 points and Coby White added 19 to help the Bulls outlast the short-handed Pistons 119-107 on Saturday night. Chicago is 3-0 against Detroit this season.

The Bulls (12-19) and Pistons (11-19) are 10th and 11th in the Eastern Conference standings, but Chicago trails eighth-place Orlando by only one game.

“We see it, and that's our goal — get into the eighth place,” Chicago's Kris Dunn said. “We've got to go in Monday against Orlando and do what we do.”

The Pistons were without Blake Griffin and Derrick Rose, and the Bulls pulled away late thanks to LaVine's outside shooting. He and White made five 3-pointers apiece.

“I thought we competed in the first half, but we ran out of gas in the second half,” Pistons coach Dwane Casey said. “We were trying to get guys in and out and give them a blow, but it is a 48-minute game.”

The Pistons led 59-53 at halftime but

LaVine broke a 96-all tie in the fourth with a 3-pointer. Then with the Bulls up by four, Detroit challenged a foul call on Tony Snell with 4:21 left. The call was overturned, but Chicago controlled the ensuing jump ball, and LaVine made another 3 to make it 106-99.

Andre Drummond had 19 points and 14 rebounds for the Pistons. Griffin has been dealing with an illness, and Rose missed the game with left knee soreness.

The Pistons had 25 turnovers in

Detroit had only 16 turnovers to Chicago's 21 on Saturday, but the Bulls made up for that by outrebounding the Pistons 46-29.

“We won the boards, which I think you have to do in this building to have a chance to win," Bulls coach Jim Boylen said. "I didn't like the turnovers, but when you make 18 3s you have a little margin for error.”