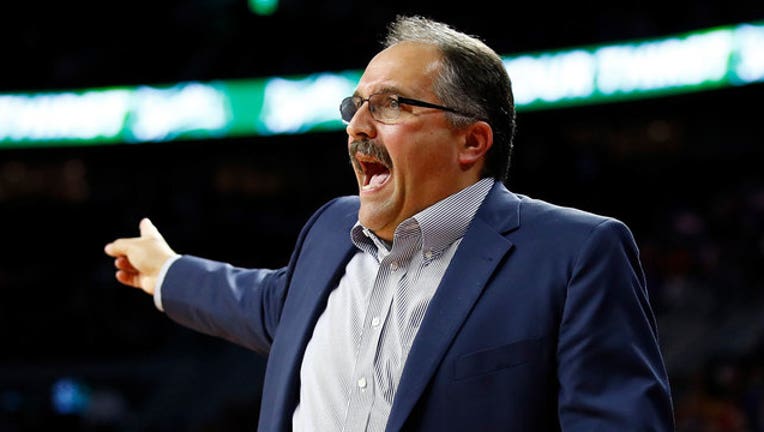 Head coach Stan Van Gundy of the Detroit Pistons yells from the bench while playing the Cleveland Cavaliers at the Palace of Auburn Hills on December 26, 2016 in Auburn Hills, Michigan. (Photo by Gregory Shamus/Getty Images)

DETROIT (WJBK/AP) - Stan Van Gundy will not return to the Detroit Pistons as coach or president of basketball operations.

The Pistons announced Van Gundy's departure Monday, with owner Tom Gores saying it was a difficult decision. He said Van Gundy wanted to return for a fifth season with the team.

"I am grateful to Stan for everything he's done for the Pistons and for the city of Detroit," Gore said. "He rebuilt the culture of our basketball team, re-instilled a winning attitude and work ethic, and took us to the playoffs two years ago. He went all-in from Day One to positively impact this franchise and this community.

"But over the past two seasons our team has not progressed, and we decided that a change is necessary to regain our momentum," Gores said.

The Pistons went 39-43 this season, missing the playoffs for the third time in four years under Van Gundy. They've made the postseason just once in the past nine seasons, and even a blockbuster trade for Blake Griffin wasn't enough to salvage 2017-18.

A decade ago, the Pistons were one of the game's most respected organizations after reaching the Eastern Conference finals six straight years and winning the NBA title in 2004. They sank quickly into irrelevance after that. Detroit missed the playoffs the final five seasons of Joe Dumars' tenure as team president, and Gores - who took over as owner in 2011 - eventually brought Van Gundy in, giving him authority in the front office in addition to his coaching duties.

The Pistons made the playoffs in Van Gundy's second season at the helm, but they couldn't build on that breakthrough. This past season was particularly disappointing because it may have been the most productive of center Andre Drummond's career.

With Drummond leading the way, Detroit started 19-14 and won on the road against the likes of Golden State, Oklahoma City and Boston. Then an ankle injury to point guard Reggie Jackson derailed the season, and not even the trade for Griffin in late January was enough to push the Pistons to the playoffs in their first season at downtown Detroit's new Little Caesars Arena.

"Stan is a competitor and he wanted to finish the job," Gores said. "He retooled a roster that we think can be very competitive in the East. I know he's disappointed, and that he cares deeply about his players, his staff, this organization and this city. He's also a professional who will make sure this is a seamless transition, and someone I hope will be a friend and adviser to me long after this transition is completed."

The Pistons went 152-176 over the past four seasons under Van Gundy, and his personnel decisions have come under more criticism than his coaching. Detroit hasn't been able to make the most of its draft position, spending first-round picks on Stanley Johnson, Henry Ellenson and Luke Kennard. This past season, Kennard shot over 40 percent from 3-point range, but he was taken one spot ahead of Donovan Mitchell in last year's draft. Mitchell blossomed into a Rookie of the Year candidate.

The trade for Griffin was a bold one for the Pistons and gives them limited flexibility going forward. Not only did the team take on Griffin's big contract, but Detroit also sent a protected first-round draft pick to the Los Angeles Clippers in the deal.