The Rays lead second place Boston and Toronto by 8 1/2 games. The fourth-place New York Yankees are nine back.

"Our job isn't to control the teams behind us, our job is to come here everyday and just try to win our game," Díaz said through an interpreter. "That's stuff we can control."

Tampa Bay slugger Nelson Cruz left the game in the sixth with a bruised right forearm. He hit by a pitch on the arm during the first inning. 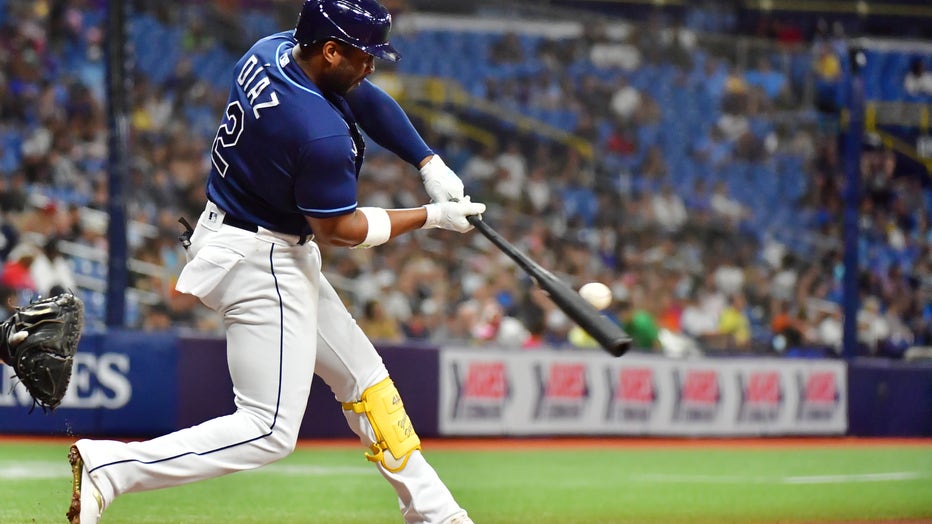 ST PETERSBURG, FLORIDA - SEPTEMBER 16: Yandy Diaz #2 of the Tampa Bay Rays hits a single in the third inning against the Detroit Tigers at Tropicana Field on September 16, 2021 in St Petersburg, Florida. (Photo by Julio Aguilar/Getty Images)

Rays manager Kevin Cash said X-rays on Cruz were negative and expects him to be available Friday.

Enns (2-0) gave up one run and three hits as six Tampa Bay pitchers combined on a six-hitter. The 30-year old left-hander, appearing in his seventh game this season and ninth overall, went four scoreless innings at Detroit last Saturday to get his first big league win.

"Dietrich has made the most of it," Cash said. "Once he got comfortable, he committed himself to the zone. His stuff is really, really sharp."

"I thought Alexander did a good job," Detroit manager A.J. Hinch said. "We didn't quite have enough offense to support him."

Díaz homered on Alexander’s first pitch in a two-run first.

"I think that really set the tone," Zunino said.

Goodrum got the Tigers within 2-1 on a fifth-inning homer. Kevin Kiermaier scored from second on Manuel Margot’s infield single in the Rays half to make it 3-1.

Anderson departed after walking Joey Wendle with two outs in the sixth and was replaced by Drew Carlton, who gave up Zunino’s 31st homer that extended the Rays lead to 5-1.

Candelario hit a solo shot with two outs in the ninth.

Tampa Bay opener Louis Head, in his 11th stint with the team this year, worked a perfect first that ended when Miguel Cabrera took a called third strike from the 31-year old rookie.

Enns ended the second and third innings by catching a runner breaking early and then throwing to first to start a sequence where both were caught attempting to steal second base.

Alexander was working from the stretch with Margot up in the fifth when plate umpire Vic Carapazza called time. As Alexander went to throw a pitch, he realized that time had been called and underhanded the ball high into the air and well past the plate.

"I've done that my whole career," Alexander said. "When they call time at that perfect moment when I'm going, I tell myself I don't want to stop myself when I'm geared up the last second, might hurt something."

Alexander also feels it provides a pitching benefit, too.

"It's kind of a free change of eye level," Alexander said. "The hitter is going to watch it. It is a little ridiculous but it's my way of shutting down right there."

Double-A Erie manager Arnie Beyeler will join the team as an extra coach later this month. … Minor league LHP Joey Wentz, who was coming back from Tommy John surgery, is not injured but has been shut down for the season after throwing 72 innings.

Rays: INF Wander Franco (right hamstring) hit off a tee, ran and did agility drills. … LHP Shane McClanahan (lower back) is expected to start Sunday against the Tigers. … LHP Cody Reed, who was expected to miss the rest of the year following thoracic outlet syndrome surgery, worked a scoreless inning for the rookie-level FCL Rays.