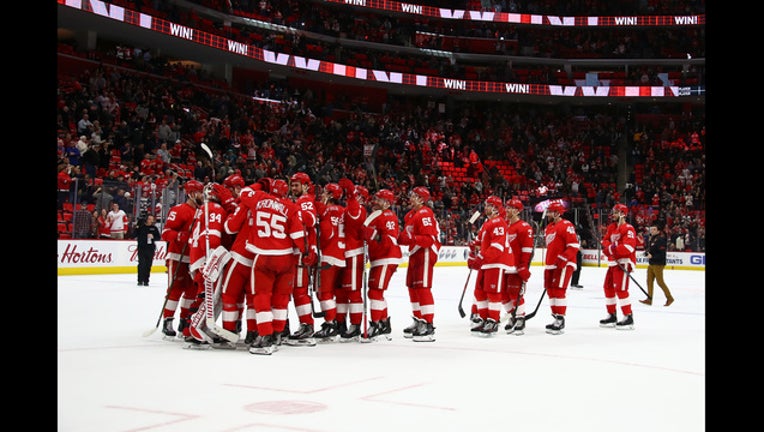 Mrazek made 30 saves, and then stopped Tomas Hertl in the seventh round of a shootout to lift the Detroit Red Wings to a 2-1 victory over the San Jose Sharks on Wednesday night. Mrazek went 3-1-1 in January with two shutouts and a .940 save percentage, easily his best month of the season.

"When you get to play, when you play lots of minutes, you get the confidence, the swagger back, and try to build from that," Mrazek said.

Justin Abdelkader scored in the final round of the tiebreaker, and Mrazek's save on Hertl ended the game. Trevor Daley scored for the Red Wings in the third period before Kevin Labanc responded for San Jose.

Gustav Nyquist, Andreas Athanasiou, Tomas Tatar and Abdelkader scored in the shootout for Detroit, while Joe Pavelski, Logan Couture and Chris Tierney scored for the Sharks.

The Red Wings had a season-high 44 shots, but San Jose salvaged a point thanks to goalie Martin Jones and Labanc's goal with 4:59 remaining in regulation. The Sharks spoiled Mrazek's bid for another shutout in January after an extended period in Detroit's zone. Luke Glendening of the Red Wings was caught without a stick, and Labanc's wrist shot through traffic beat Mrazek high to the glove side .

Jones played in a 5-2 loss at Pittsburgh the previous night, allowing one of the goals on a bad giveaway . He was much better against Detroit.

"He looked good and gave us a chance to win a game that we probably didn't deserve," Sharks coach Peter DeBoer said. "The Red Wings looked fresher than we did and played a smart game. Jonesy gave us a chance, but I think getting one point is a fair result."

Detroit was playing its first game after the All-Star break. The Red Wings had their chances before Daley opened the scoring. Darren Helm was unable to convert a clean breakaway early in the second, and Martin Frk had an open net on a third-period rebound, but the puck went wide.

San Jose defenseman Justin Braun, who was without a stick at the time, stuck out a skate and appeared to get a piece of Frk's shot.

Daley put Detroit up 1-0 with 13:12 remaining in the third. Jones appeared to have stopped Daley's backhander from a tough angle, but the puck dropped over his left pad and ended up in the net for the defenseman's fourth goal of the season.

The goal came moments after Pavelski hit the post at the other end.

NOTES: San Jose's Brent Burns had six shots in the first period and nine for the game. ... Labanc played his 100th NHL game. The goal was his sixth of the season. ... The Sharks lost their third straight game without Joe Thornton, who is out with a right leg injury.