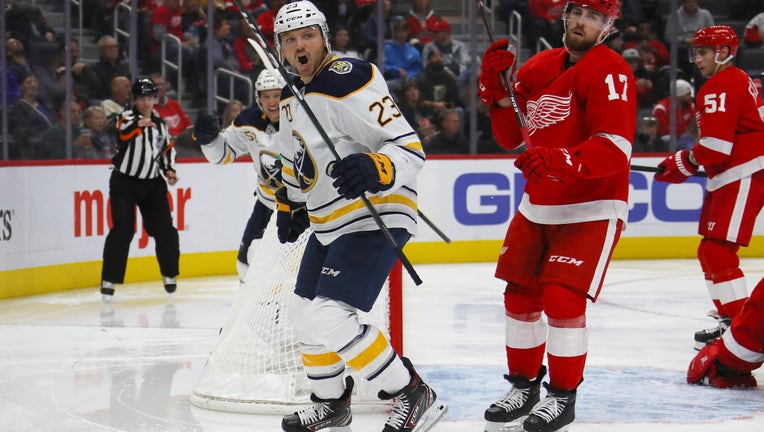 DETROIT - The Buffalo Sabres bounced back in the best way Friday night.

Linus Ullmark made 41 saves, Sam Reinhart had a goal and an assist and the Sabres beat the Detroit Red Wings 2-0 on Friday night. Buffalo fell 6-2 to the New York Rangers a night earlier.

"I really liked the way we were able to regroup after last night," said Reinhart, who got his fifth goal. "We talked in the room about what we did wrong, and then we were able to refresh our minds and come out and play like this."

Buffalo (9-2-1) also got a goal from defenseman Jake McCabe and two assists from Jack Eichel.

"We have so much confidence in this room right now that there's no panic when we lose a game," McCabe said. "Obviously everyone was a little off last night, but we were able to refocus on tonight's game and do a lot of good things."

"We came up short obviously. We pushed. I thought we played a pretty solid game defensively other than the one goal there," Red Wings center Dylan Larkin said. "... Just, we gotta score. You can't win a game if you don't score."

Detroit has been outscored 29-9 during its losing streak.

McCabe gave Buffalo a 1-0 lead with 8:20 left in the second period. His wrist shot from the left point got past Howard, who was screened.

McCabe's first goal of the season came after he missed most of the first period getting his face stitched up.

"I got a puck in the chin on my second shift and got my face slammed into the glass on my third shift," McCabe said. "So I've got my Halloween costume all ready."

Reinhart scored on a power play 1:15 into the third when he tipped a pass from Victor Oloffson.

Detroit outshot Buffalo 12-6 in the first period. Ullmark stopped Valtteri Filppula on a breakaway around 3:20 into the game.