Sebastian Aho had a goal and an assist, and Teuvo Teravainen also scored to help Carolina win for the sixth time in seven games.

Aho scored with 9:23 left in the second period. He put in the rebound of his attempted pass from the high slot, which had gone off the boards behind the net and caromed into the crease. Aho raced in and poked it into the net before Howard could find and cover the puck. It was Aho’s 12th goal and his third in four games. 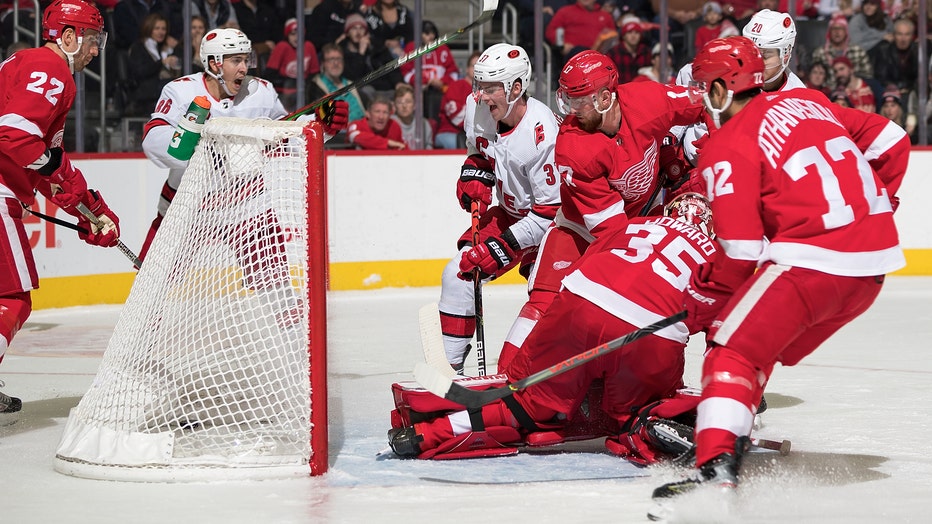 DETROIT, MI - NOVEMBER 24: Sebastian Aho #20 of the Carolina Hurricanes scores a second period goal past goaltender Jimmy Howard #35 of the Detroit Red Wings as Andreas Athanasiou #72, Filip Hronek #17 and Patrik Nemeth #22 of the Wings look for the

Teravainen added an empty-net, short-handed goal with 1:13 left. It was his seventh goal.

Reimer’s biggest saves in his first shutout of the season came early. He made a point-blank stop on Valtteri Filppula a little under five minutes in, stopped Tyler Bertuzzi — who skated in from the bottom of the right circle — at 6:22, and thwarted Darren Helm’s short-handed breakaway attempt with a little more than four minutes left in the opening period.

NOTES: Detroit RW Anthony Mantha, who leads the team with 12 goals, will miss at least a week with a lower-body injury suffered in Saturday night’s 5-1 loss to the New Jersey Devils. ... RW Filip Zadina, the sixth overall pick of the 2018 draft, was recalled from AHL Grand Rapids to take Mantha’s place in the lineup. … Carolina improved to 11-2-0 when scoring first and 10-0-0 when leading after two periods.

Hurricanes: At the New York Rangers on Wednesday night.