GREEN BAY, Wis. - Aaron Rodgers will have the entire postseason to ponder his future.

The four-time MVP and the Green Bay Packers won’t be participating in the playoffs.

Rodgers was intercepted by Kerby Joseph on what might have been the final pass of the future Hall of Famer’s career, and Green Bay lost 20-16 to the Detroit Lions on Sunday night in a game the Packers needed to win to reach the playoffs.

Although he is under contract for next season, the 39-year-old Rodgers has said he doesn’t know whether he will continue playing.

"It’s a little raw right now. It’s just a little bit after the game, so I want to take the emotion out of it and have the conversation and see where the organization’s at and see how I feel after some time has passed," Rodgers said.

After winning four straight games and receiving plenty of help from other teams, the Packers had control of their postseason fate heading into the final game of the NFL regular season. But they fell short against the Lions, who had been eliminated from the playoffs earlier Sunday when the Seattle Seahawks beat the Los Angeles Rams 19-16 in overtime.

"Basically we found out in pregame warmup or coming off, and I’m telling you, we were unfazed," Lions coach Dan Campbell said. "We knew what we were coming in here for, and it was to gain some respect and show what we’re capable of no matter what happened. We knew the only way to do that is to win. So our guys were locked in, they were unaffected by that, because we knew what the objective was." 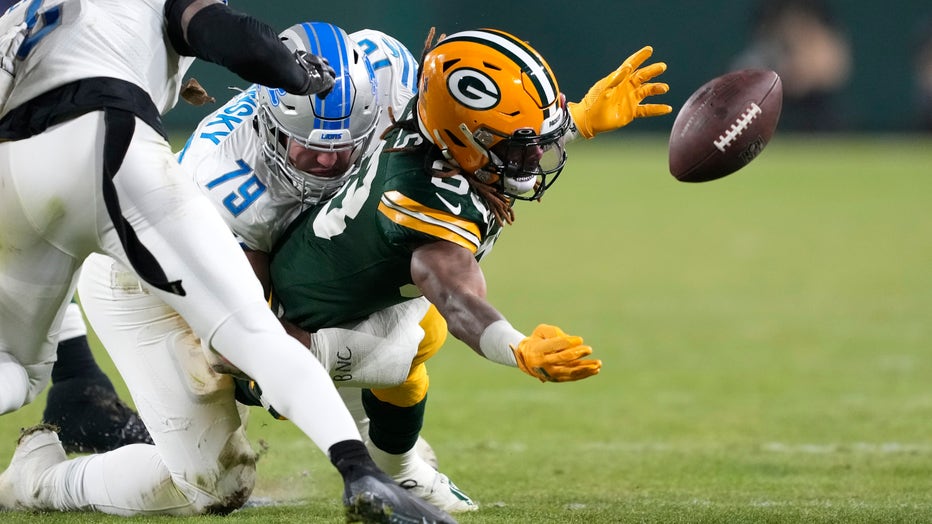 GREEN BAY, WISCONSIN - JANUARY 08: John Cominsky #79 of the Detroit Lions forces a fumble by Aaron Jones #33 of the Green Bay Packers during the second quarter at Lambeau Field on January 08, 2023 in Green Bay, Wisconsin. (Photo by Patrick McDermott/

Seattle (9-8) instead earned the NFC’s last playoff spot and will play Saturday at San Francisco (13-4). The Packers (8-9) missed the playoffs for the first time in Matt LaFleur’s four seasons as coach.

Rodgers went 17 of 27 for 205 yards with one touchdown and became the eighth NFL player to have at least 5,000 career completions.

After the final seconds ticked off the clock, Rodgers walked off the field, gazing into the stands, side by side with Randall Cobb, perhaps soaking up the sights and sounds.

"At some point the carousel comes to a stop and it’s time to get off, and I think you kind of know when that is," Rodgers said. "And that’s what needs to be contemplated. Is it time? Also, what’s the organization doing? That’s part of it as well. But the competitive fire is always going to be there. I don’t think that ever goes away."

Jamaal Williams’ second 1-yard touchdown run of the night against his former team put the Lions (9-8) ahead with 5:55 remaining. Williams had 17 touchdown runs to break the Lions’ single-season record that Barry Sanders had set in 1991.

Green Bay only got as far as its own 33 on its next series before Joseph picked off Rodgers’ deep throw on third-and-10 with 3 1/2 minutes left.

Detroit held onto the ball for the remainder of the game. Facing fourth-and-1 from the Green Bay 15, the Lions passed up a field-goal attempt and got a clinching first down on Jared Goff’s 9-yard pass to DJ Chark. Goff also had connected with Chark for a first down on fourth-and-2 during the Lions’ go-ahead drive.

The Lions rebounded from a 1-6 start by winning eight of their last 10 games.

"The hard part of this is that it’s over for this season, because it is a special group," Campbell said. "But, hey, if you’ve got to go down on that one, if it’s the last one of for the season, man, what better way to go out than that for 2022."

Playing to extend their season, the Packers frequently lost their composure.

Linebacker Quay Walker was ejected during the Lions’ go-ahead drive after pushing Lions team physician Sean Lynch, who was attending to an injured Detroit player. That was the second ejection of the season for the rookie first-round pick, who also got tossed from a loss at Buffalo for shoving Bills practice-squad tight end Zach Davidson.

Detroit’s Michael Badgley made a field goal to close the first half after a personal foul on Green Bay’s Rasul Douglas turned what would have been a 48-yard attempt into a 33-yarder.

"I’ve got a much higher standard for our players than to do silly things like that," LaFleur said. "I mean, we’ve had a guy get ejected twice. I don’t think I’ve ever seen that in my career. And we’ve got to be much more mentally tough."

Green Bay led 9-6 after a first half that featured five field goals and numerous wasted chances. Then, on the Packers’ first possession of the second half, Mason Crosby’s 53-yard field-goal attempt hit the crossbar and bounced backward. Crosby had gone 3 of 3 on field-goal attempts in the first half.

The Lions took over and moved ahead for the first time in the game. Goff threw a 43-yard pass to Kalif Raymond to set up Williams’ TD from 1 yard out.

The Packers answered on their next series. Rodgers connected with Christian Watson for a 45-yard completion that set up his 13-yard touchdown pass to Allen Lazard.

On the Packers’ final possession, Rodgers threw two incompletions before Joseph intercepted him for the third time this season. Joseph had two of the Lions’ three picks in a 15-9 victory on Nov. 6 and had another potential interception on Sunday that was nullified by a penalty.

This marks the third straight season the Packers have ended their season by losing at Lambeau Field. They had the NFC’s top regular-season record each of the last two years but fell to San Francisco in the divisional playoffs last season and to Tampa Bay in the conference championship game a year earlier.

This season there won’t be any playoff games involving the Packers, at Lambeau Field or anywhere else.

The Lions played without cornerback Jeff Okudah (elbow) and defensive tackle Michael Brockers (ankle). Packers CB/KR Keisean Nixon left in the fourth quarter to get evaluated for a concussion.