KANSAS CITY, Mo. - KANSAS CITY, Mo. (AP) — Brady Singer won for the first time in over a month as the Kansas City Royals beat the Detroit Tigers 5-2 to earn their first winning homestand in nearly a year.

The Tigers loaded the bases with no outs to start the game but scored only one run via Harold Castro’s sacrifice fly.

Detroit opened the fourth with three consecutive singles, but their rally was stifled when Jonathan Schoop was thrown out trying to score by right fielder Edward Olivares. 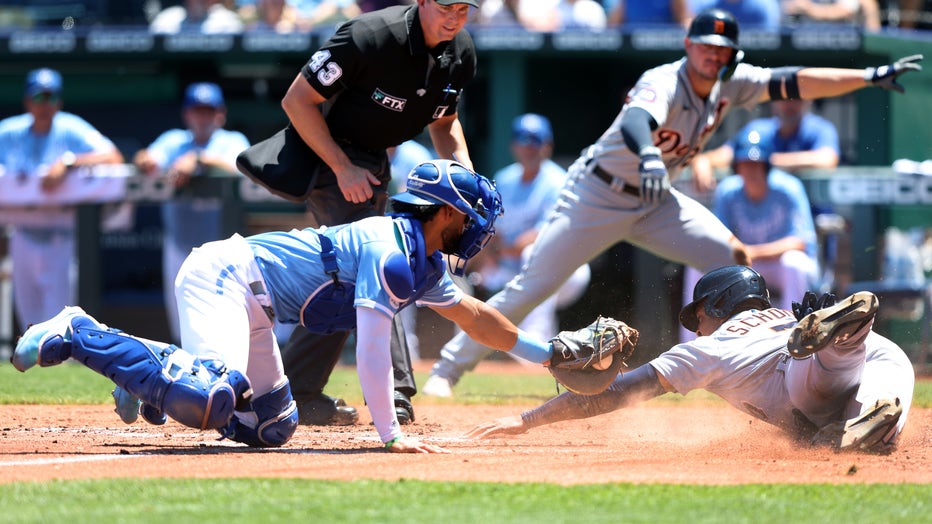 KANSAS CITY, MISSOURI - JULY 13: Jonathan Schoop #7 of the Detroit Tigers is tagged out at home plate by catcher MJ Melendez #1 of the Kansas City Royals while attempting to score during the 4th inning of the game at Kauffman Stadium on July 13, 2022

Singer walked the bases full in the sixth, then struck out Spencer Torkelson and Akil Baddoo to end the threat.

Scott Barlow worked the ninth for his 15th save.

With series wins against Cleveland and Detroit, the Royals concluded their first winning homestand since July 23-29 last year.

Benintendi, named to his first All-Star Game this week, scored ahead of Emmanuel Rivera’s RBI double during a four-run fourth inning.

Rivera extended his hitting streak to a career-best 11 games.

With the bases loaded, Olivares reached on Schoop’s error as two crossed the plate.

Hunter Dozier added an RBI triple the following inning against Tarik Skubal (6-7), who is 1-6 in his last seven starts while posting a 7.46 ERA.

The Tigers begin a four-game series in Cleveland Thursday. RHP Elvin Rodriguez (0-2, 11.51 ERA) will be recalled from Triple-A Toledo to make the start opposite RHP Tristan McKenzie (6-6, 3.47).

The Royals begin a four-game series in Toronto on Thursday. Probable starting pitchers have not been announced.