MIAMI GARDENS, Fla. - MIAMI GARDENS, Fla. (AP) — Michigan State spent the week preparing for a fight. That was the analogy that the Spartans used all week, telling each other that their game at Miami would be a grind-it-out bout decided in the later rounds.

Sure enough, it happened.

And the Spartans were the ones throwing the knockout punch.

Payton Thorne passed for 261 yards and four touchdowns, two of those scoring throws going to Jalen Nailor, and Michigan State extended its unbeaten start by topping No. 24 Miami 38-17 on Saturday. The Spartans outscored Miami 21-3 in the fourth quarter to pull away, somehow looking like the fresher, fitter team on a day where the on-field temperature hovered near 100 degrees. 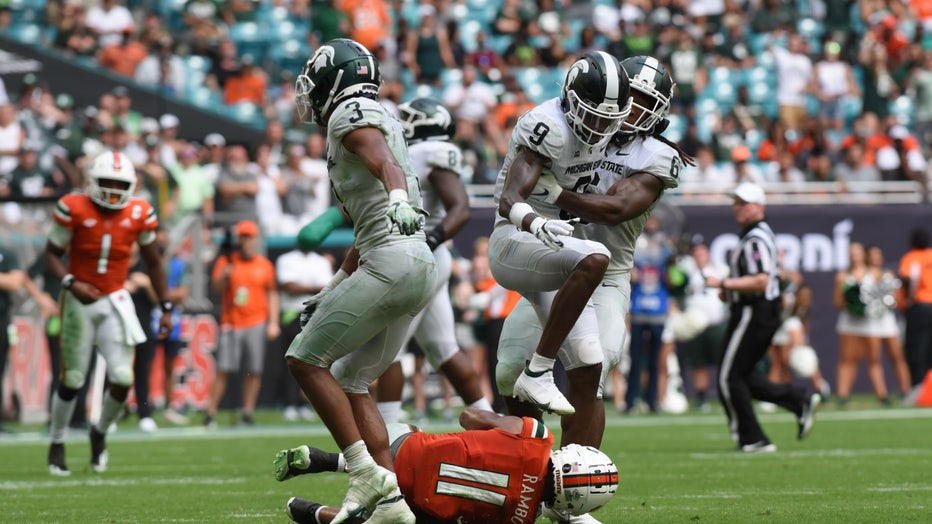 "There was a point in time when we said, ‘Let's finish this thing,'" Thorne said.

Kenneth Walker III rushed for 172 yards and caught a touchdown pass for the Spartans (3-0), who are off to their best start since 2015.

Jayden Reed also had a scoring catch and a touchdown run for Michigan State, which forced four turnovers.

King was 38 of 59 passing — both of them Miami school records — for 388 yards, with two touchdowns and two interceptions. He also fumbled the ball away once and lost another on a strip-sack in the fourth quarter, plus was shaken up at least twice and needed to leave the field once for evaluation.

"The guy gives everything out there," Miami coach Manny Diaz said of King. "He lays it all on the line for the University of Miami. ... He's hurt, and hurt in a way because he's hurt emotionally. He wants so badly for us to be great and be great on offense. He's such a competitor and he's not going to be satisfied until we are."

King — who rehabbed a torn ACL throughout the offseason and didn't miss a game — said he would get his shoulder examined Sunday, but insisted it was "not too bad."

Charleston Rambo tied a school record with 12 catches for Miami, good for 156 yards and both of the Hurricanes’ touchdowns. Andres Borregales kicked a 55-yard field goal — matching the fourth-longest in school history — for the Hurricanes midway through the fourth, getting them within a touchdown.

Thorne didn’t need long to end their hopes, coming up big with his legs as well on what became the game-sealing drive.

He got 22 yards up the middle on third-and-6 and then fell forward barely far enough — maybe by a chain link, two at the most — on fourth-and-1 with 4:25 left to extend the series.

The effort was worthwhile and one play later, Thorne had Miami fans leaving for the exits in droves. He found a wide-open Nailor for an easy 39-yard score that made it 31-17 and ensured Michigan State would finally beat the Hurricanes for the first time in five tries.

"It was a good team win for us on the road against a good opponent," Michigan State coach Mel Tucker said. "Credit to our entire organization ... everyone had a part in this. We had a lot of challenges that we knew we would have to overcome to get this done."

The Hurricanes (1-2, for the second time in the last three years) were outgained 193-52 in rushing and were minus-4 in the turnover battle.

After expressing frustration all week over not getting red-zone touchdowns — the Hurricanes turned eight such trips into only two TDs in the first two games — Miami left the offense on the field and King hit a wide-open Rambo in the back of the end zone for a 7-3 lead.

Walker caught a 7-yard pass from Thorne with 2:56 left in the half to put Michigan State back on top, 10-7.

The Spartans wouldn’t trail again, then wound up dominating those late rounds to finish it off.

"Physical football," Thorne said. "That was our goal and our focus."

Michigan State: It was 87 degrees at kickoff with a heat index making it feel like 97 — the warmest game for the Spartans since a trip to Arizona State in 2018. They had sun-shielding canopies over the benches with misting fans and some players resorted to putting wet towels atop their heads. And clearly, they weren’t bothered by any of the weather challenges.

Miami: This was Miami’s worst home non-conference loss since a 31-6 defeat to East Carolina in 1996. The Hurricanes have trailed at halftime in five consecutive games going back to last season, their longest such streak since midway through the 2013 season.

Michigan State could return to the AP Top 25 for the first time since being ranked 25th in the poll of Sept. 29, 2019. Miami’s run of 19 consecutive weeks in the poll — the eighth-longest such streak in the nation — will end.