Kyle Dugger returned a fumble 59 yards for a touchdown for the Patriots as the defense and ground game gave Zappe plenty of support. The rookie completed 17 of 21 passes for 188 yards with Mac Jones out for the second straight week with an ankle injury and backup Brian Hoyer on injured reserve following a concussion.

Zappe had miscues, including a fumble after a botched exchange with Stevenson. He also had a pass intercepted when his slant to Nelson Agholor was mishandled, tipped in the air and picked off by De’Shon Elliott. 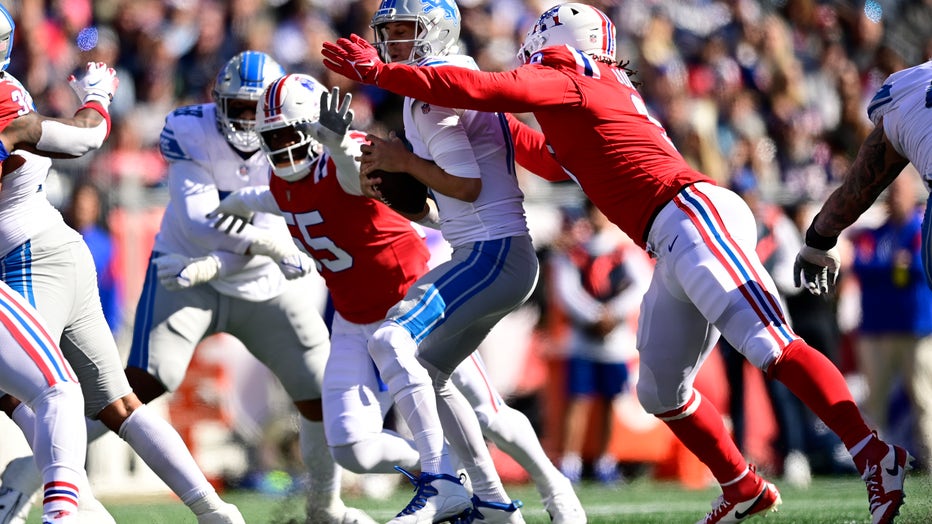 FOXBOROUGH, MASSACHUSETTS - OCTOBER 09: Matthew Judon #9 of the New England Patriots sacks Jared Goff #16 of the Detroit Lions during the second quarter at Gillette Stadium on October 09, 2022 in Foxborough, Massachusetts. (Photo by Maddie Malhotra/G

Stevenson carried the ball 25 times and had a 49-yard run to set up New England’s second field goal of the game. Jakobi Meyers had seven catches for 111 yards and a touchdown.

Receiver Amon-Ra St. Brown returned for Detroit after sitting out last week with an ankle injury. But New England’s defense took advantage of a team that was still without running back D’Andre Swift and receiver D.J. Chark, stopping the Lions six times on fourth down.

Detroit’s absences were particularly apparent when it drove deep into Patriots territory late in the second quarter.

Facing third-and-2 on the Patriots 25, Craig Reynolds ran for a loss of 7 yards. The Lions went for it on fourth down, but Judon sacked and stripped Goff. Dugger scooped up the ball and returned it for the score.

Rookie defensive back Jack Jones also had an interception in the end zone to help set up one of three Patriots’ field goals in the first half as they took a 16-0 lead into the break.

Detroit defensive back Saivion Smith was carted off the field following a collision early in the first quarter.

He remained on the field, lying face down on his side following the Patriots’ second offensive play of the game.

Trainers immediately called for a stretcher. Smith was on the field for several minutes as an ambulance was driven onto the field. The entire Lions bench emptied and Smith's teammates circled him before he was loaded and driven off.

The Lions announced he had been taken to a hospital to be evaluated for a neck injury.

Lions: CB Will Harris left in the first half with a groin injury. ... Elliott left in the second half with cramps. ... S Ifeatu Melifonwu left with an ankle injury.

Patriots: At Cleveland next Sunday.