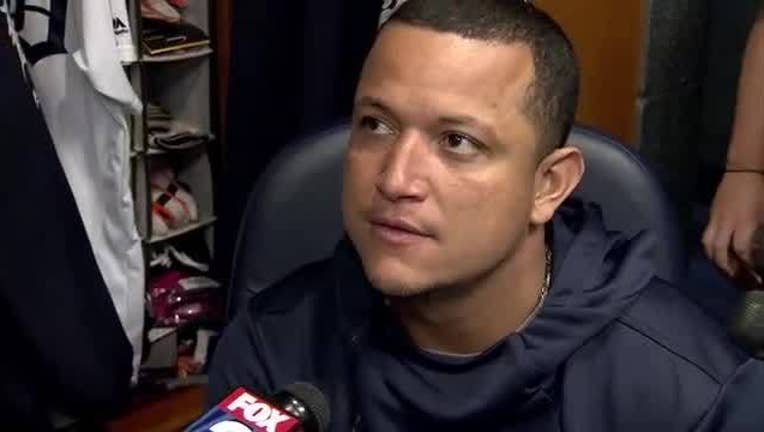 LAS VEGAS (AP) - Detroit Tigers slugger Miguel Cabrera might play only a game or two each week at the start of spring training as he returns from season-ending biceps surgery.

Manager Ron Gardenhire plans to check in regularly with Cabrera to determine his availability when Grapefruit League exhibition games begin in February. There's no plan yet as to how much action the two-time AL MVP might see at first base.

"He's going to play one day a week, two days," Gardenhire said Wednesday at the winter meetings. "We're just going to let it all play out and see how he feels when he gets there and see how healthy he is. He's doing good right now, which is a good sign for us."

Cabrera ruptured his left biceps tendon in mid-June. Gardenhire has no plans of rushing back Cabrera, even if the rebuilding Tigers could use his powerful bat in the middle of the order.

The plan as of now? There isn't one - just constant communication between Gardenhire, Cabrera and certainly the medical staff to evaluate what Cabrera can do on the field and at the plate.

"The best thing for me to do with Miggy is, by the time we get to spring training, see how he's feeling and go day by day with him throughout the course of spring, giving him enough work and letting him get things," Gardenhire said. "And we'll figure it out as we go along."

Cabrera has been determined to show he's still a dangerous hitter. He had three home runs in 38 games and didn't play after June 12 because of the left biceps injury.

Turning 36 in April, Cabrera will look to bounce back after his 2017 year was disappointing in another way: just 16 home runs, an unusually low .399 slugging percentage - it had been in the .500-.600s every season but his rookie year - and .249 batting average.