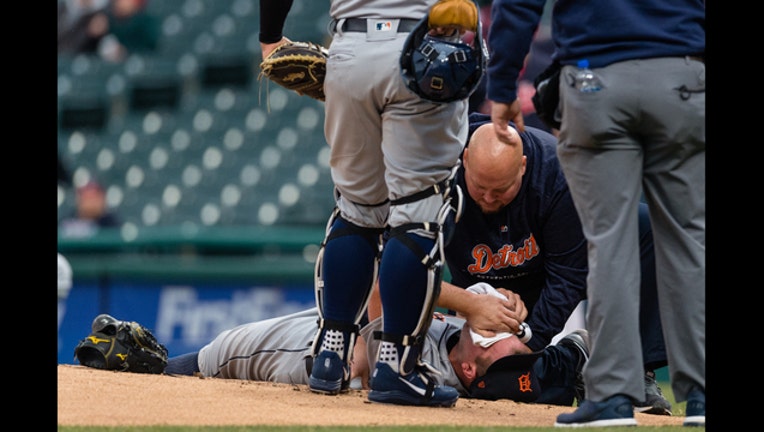 CLEVELAND, OH - APRIL 11: Starting pitcher Jordan Zimmermann #27 of the Detroit Tigers lies on the ground after being hit in the head by a line drive hit by Jason Kipnis #22 of the Cleveland Indians. (Photo by Jason Miller/Getty Images)

CLEVELAND (AP) - Jordan Zimmermann was back in Detroit's clubhouse a few hours after being hit in the face by Jason Kipnis' line drive in the first inning of Wednesday night's 5-1 loss to the Cleveland Indians and felt fortunate to come away with only a bruised jaw.

"Obviously it could've been worse," Zimmermann said. "It could've been a break, but it still didn't really feel that great. I'm sure it'll be worse tomorrow. I'll be good to go next time around."

Making his third start of the season, Zimmermann retired Francisco Lindor on a fly ball starting the game. The 31-year-old right-hander had little time to react to Kipnis' liner on a 2-2 pitch.

Zimmermann was face down on the pitcher's mound for several moments after being struck and was attended to by head athletic trainer Doug Teter.

"It was terrifying and it made a terrible sound," Detroit manager Ron Gardenhire said. "Your heart drops. When you go out there you never know what you're going to see."

First baseman Miguel Cabrera fielded the ball after Zimmermann was struck and stepped on the base for the out.

An obviously distraught Kipnis crossed the bag and knelt on the first base line as Zimmermann was examined. Several Tigers' position players also knelt and the crowd of 10,872 went silent.

"You never want that," Kipnis said. "Everyone's out there competing. It was a scary moment, tough guy just to walk off like that. He's got a strong jaw."

Zimmermann, who passed the concussion protocol tests, has evidence of that. He had his jaw broken on a line drive while pitching for the University of Vermont in 2007. Doctors inserted 11 screws and several plates.

"I felt it," Zimmermann said. "I went down and just felt all my teeth were there, and my jaw wasn't peeled in like the first time it happened. So I think I got lucky. The first time I broke it back in college, they put a couple plates in there and the doc told me you'll never break it again. Put it to the test tonight and everything came back just fine."

Carlos Carrasco (3-0) pitched a three-hitter, struck out six and walked one in his first complete game this season. He allowed Leonys Martin's home run in the sixth.

Carrasco was hit on the face by a line drive off the bat of Melky Cabrera of the Chicago White Sox at Progressive Field in 2015.

"I think I'm lucky because it got a little bit of the glove," Carrasco said. "I don't know about him. He was hit really had. I hope everything is fine with him."

Cleveland scored four runs in the fourth off Daniel Norris (0-1), who replaced Zimmermann. Yonder Alonso had a two-run single, and Tyler Naquin and Francisco Lindor had RBI singles.

Norris blanked the Indians until the fourth. Jose Ramirez and Michael Brantley singled and pulled off a double steal. Alonso's single to right scored both runners. Naquin and Lindor also had run-scoring hits.

Brantley added an RBI single in the seventh. Kipnis broke an 0-for-23 slump with a seventh-inning double. The Indians, who entered batting a big league-low .158, had a season-high 10 hits.

The Tigers, who used four relievers, optioned outfielder Mikie Mahtook to Triple-A Toledo and will call up a pitcher for Thursday's series finale. Mahtook batted .129 in nine games.

The Indians have defeated the Tigers 10 straight times and are 30-10 against Detroit dating to the start of the 2016 season. Cleveland has also won a season-high four straight games.

Tigers pitching coach Chris Bosio missed his second straight game because of an undisclosed health issue. Gardenhire said Bosio remained in Cleveland but offered no other details. Bosio was in the Tigers' dugout Monday night and underwent tests Tuesday after he didn't feel well.