DETROIT - Sonny Gray allowed two hits in six innings to lead the Minnesota Twins to a 9-1 win over the Detroit Tigers on Sunday.

Jose Miranda had three hits and scored twice for the Twins, who are 2-0 since the All-Star break.

The Twins took a 3-0 lead in the first with a little help from the Tigers. With one out, Carlos Correa singled and took third on Jorge Polanco’s double. Max Kepler hit a grounder to second, but Correa beat Jonathan Schoop’s throw to the plate. 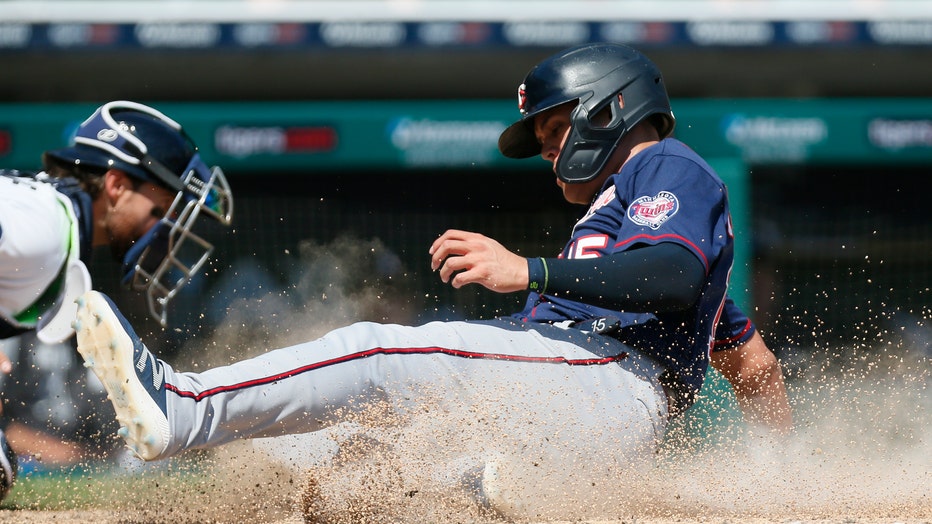 DETROIT, MI - JULY 24: Gio Urshela #15 of the Minnesota Twins scores against the Detroit Tigers on a double hit by Luis Arraez during the seventh inning at Comerica Park on July 24, 2022, in Detroit, Michigan. (Photo by Duane Burleson/Getty Images)

Detroit didn't get a baserunner until Gray hit Javy Baez with one out in the fourth. Miguel Cabrera drew a two-out walk, and Eric Haase made it 3-1 with a single.

The Twins scored three runs in the seventh, including RBI doubles by Urshela and Polanco, and Gary Sanchez made it 8-1 with a two-run double in the eighth.

Any thoughts of a late Tigers rally ended in the bottom of the eighth, when Gordon reached over the left-field fence to rob Riley Greene of a home run.

Kody Clemens pitched the ninth for Detroit, the third time he has pitched this season, allowing one run on three hits.

Kepler left the game after being hit on the right foot in the third inning, while Baez came out in the sixth inning with a bruised upper arm after being hit in the fourth.

Twins: Off on Monday, and start a two-game series in Milwaukee on Tuesday. Dylan Bundy (6-4, 4.71 ERA) will get the start against a to-be-announced Brewers pitcher.