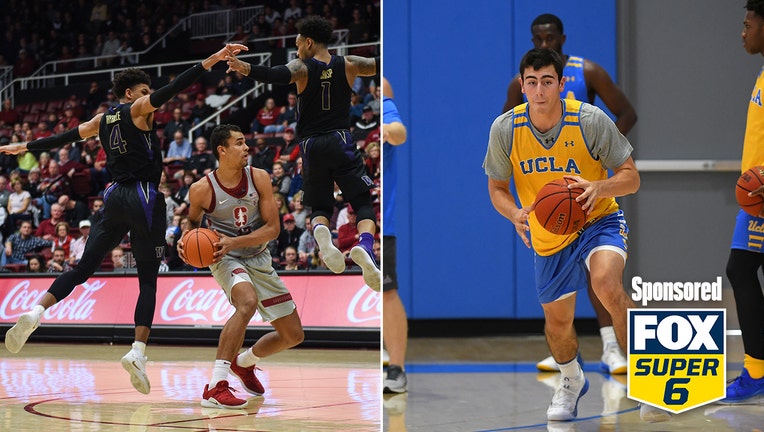 The PAC-12 has a wonderful tradition of arraigning its conference schedule into bunched up road trip weekends.

One of the best traditions of all, however, used to be when UCLA would have its bunched up weekends at California and then at Stanford. In a span of a few days, three teams with historic programs among the best in America would gather together.

For the Bruins, this is "Northern California" weekend. After a Thursday night game at Berkeley, UCLA will stick around for a Saturday afternoon contest against Stanford (5 p.m. ET, FOX) that features two teams with strong NCAA aspirations.

And you could win right along with it with FOX Super 6. Just download the Super 6 app, predict the right answers to the six questions on this game and you could win $1,000. It’s that simple.

Which team will score the last point of the first half?
UCLA or Stanford

Heading into their games on Thursday evening, UCLA had outscored its opponents by a 472-429 margin while Stanford’s advantage is 422-378.

Oscar Da Silva is the leading scorer for the Cardinal, averaging 19.3 points per game. Stanford has three other players in double figures per game heading into Thursday night’s game against USC in Daejon Davis (13.1), Zaire Williams (12.5) and Jaiden Delaire (10.3).

Coming into Thursday night’s contests, UCLA is averaging 77.8 points scored per game while Stanford is averaging 72.4 points a contest. The most that UCLA has scored in a game this year is 107 points against Pepperdine in triple overtime back on Nov. 27 while Stanford scored 92 against Washington on Jan. 7.

Who will win the game?
UCLA or Stanford with ranges of three or less, 4-9 points or 10 or more.

While UCLA has climbed into the Top 25 and appears on track for one of the 68th berths in the NCAA Tournament in March, Stanford needs to get back on track if they want to entertain March plans. Add in the toll of back to back road games- especially in a quarantine environment- and the signs point towards Stanford pulling the upset.