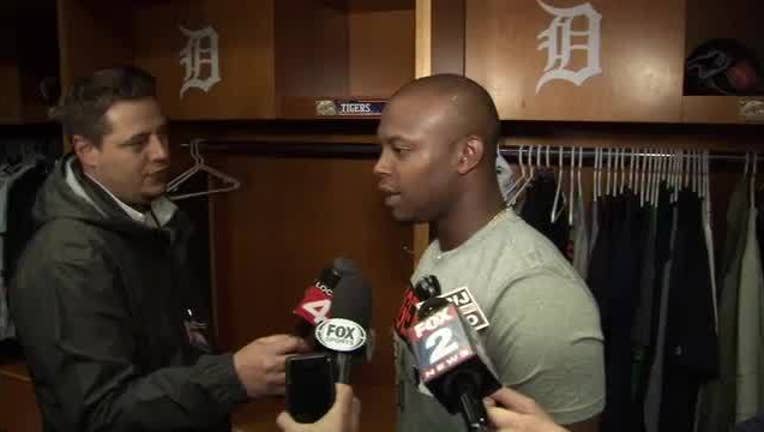 PHOENIX (AP) - For a starting pitcher, Justin Verlander said, there's such a thing as too much rest.

And the two extra days he had this time were too many, he said.

Still, Verlander pitched into the seventh inning while the Detroit bats did the rest in the Tigers' 7-3 victory over the Arizona Diamondbacks on Tuesday night.

"It's a weird thing. It's hard to explain," Verlander said, "but being a little too fresh, your arm's working a little quicker and I just couldn't quite catch up with my curve ball."

Verlander (3-2) hadn't pitched since May 2 as manager Brad Ausmus ordered the extra two days off after his ace right-hander threw 119 and 118 pitches in consecutive starts.

Justin Upton and James McCann homered and Mikie Mahtook singled in two runs for the Tigers in the opener of a two-game series.

"I just walked too many guys," he said. "This is a lineup you can't do that with. They will make you pay for it. I walked the leadoff guy twice and he scored. I have to be better."

Although it wasn't a save situation, new closer Justin Wilson pitched a perfect ninth for the Tigers. Ausmus announced before the game that Wilson would take over closing duties from Francisco Rodriguez after a pair of blown saves over the weekend in Oakland.

Verlander was consistently at 96 mph with his fastball and hit 99 on a 3-2 pitch that struck out Jeff Mathis to end the sixth.

He walked Chris Herrmann and gave up a single to A.J. Pollock to start the seventh before being lifted. Arizona loaded the bases with two outs, but Shane Greene struck out Yasmany Tomas to end the threat.

Miguel Cabrera's RBI double off the center field wall tied it at 3 during the fifth inning, then the Tigers loaded the bases with one out. Ray fanned ex-Diamondback Upton before Mahtook's single up the middle brought home two and made it 5-3.

Mahtook plays solely against left-handers so he hasn't played much. He made the most of his chances Tuesday.

"My swing's in a good place right now and mentally I'm in a good spot," he said. "I know whenever my time is to come up to the plate I'm going to come through."

Upton homered to straightaway center, into the camera window on the big green batter's eye, off Tom Wilhelmsen to make it 6-3 in the eighth. He made a "shhh" sign with his finger and lips to the crowd as he went back into the dugout.

Arizona broke through with three off Verlander in the third, two of them with two outs. Paul Goldschmidt singled in a run and scored from second on Tomas' base hit, sliding home just ahead of Upton's throw from right field to tie it at 2.

Ausmus said it was tough to tell Rodriguez he was being replaced, especially since the right-hander has 437 career saves, fourth on baseball's all-time list. But he said Rodriguez understood why it was being done and handled it well.

When Detroit scored in the ninth, it meant it wasn't a save situation, but Ausmus still went with Wilson. He was taking no chances.

"After the last two losses," Ausmus said, "I just wanted to win."

Tigers: 2B Ian Kinsler was out the lineup for the fourth straight game with left hamstring tightness. He hasn't played since May 3.

Diamondbacks: Arizona reliever T.J. McFarland was hit in the leg with a line drive off the bat of McCann in the sixth and had to leave the game. Manager Torey Lovullo said McFarland had a bruised ankle and it was not considered serious.

Detroit sends RH Matthew Boyd (2-2, 3.78 ERA) to the mound in the series finale Wednesday night. Zack Godley (0-0, 3.60) will be called up from Triple-A Reno again for a spot start. He gave up two runs in five innings in a start against the Padres on April 26.