LAHAINA, Hawaii - Landers Nolley II peeled off a screen and, without hesitation, let a 3-pointer fly from the wing. The ball dropped, giving Virginia Tech the cushion it needed to hold off No. 3 Michigan State.

One big shot, one massive victory for the Hokies.

Nolley hit that crucial 3-pointer in the final minute and scored 22 points, helping Virginia Tech outlast the Spartans 71-66 at the Maui Invitational on Monday.

“They believed in me,” Nolley said. “And I hit the shot.”

Virginia Tech (6-0) had low expectations - at least outside the program - in coach Mike Young’s first season in Blacksburg, picked to finish 14th in the Atlantic Coast Conference preseason poll.

The Hokies grinded through a back-and-forth second half before going up 10 with 4½ minutes left. Michigan State fought back to pull within one, but Nolley responded with a 3 for a 68-64 lead with 47 seconds left. 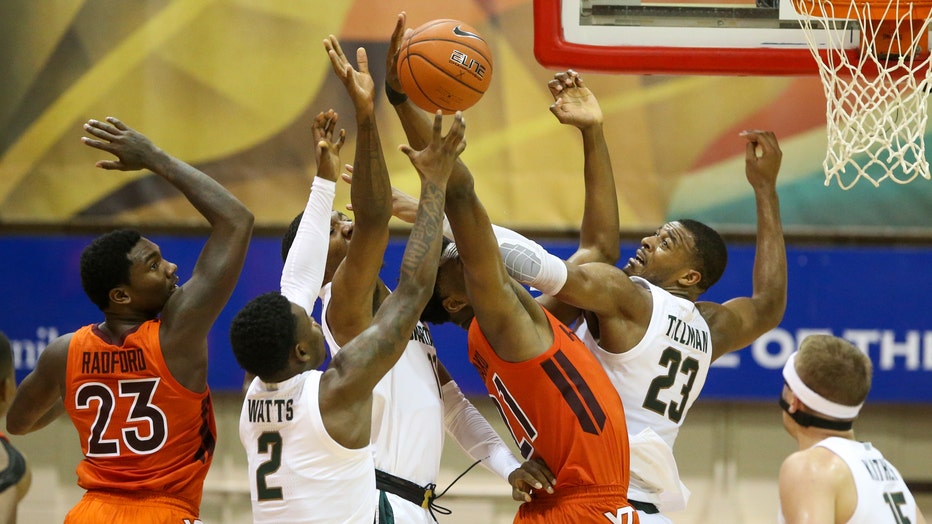 LAHAINA, HI - NOVEMBER 25: John Ojiako #21 of the Virginia Tech Hokies battles with Rocket Watts #2, Aaron Henry #11 and Xavier Tillman #23 of the Michigan State Spartans for control of a rebound during the first half at the Lahaina Civic Center on N

Virginia Tech made just enough free throws down the stretch to earn a spot in Tuesday’s semifinal against Dayton.

“That’s a really good player making a big-league play,” Young said. “It probably went a long way in getting us out of here with a win.”

Michigan State (3-2) trailed 32-28 at halftime after preseason All-American Cassius Winston was limited to eight minutes due to two fouls.

Winston helped sparked a late run, but the Spartans couldn’t finish it off. Aaron Henry led Michigan State with 18 points and Winston was held to seven on 2-of-8 shooting.

Michigan State has had a rough start to the season. The preseason AP No. 1, the Spartans lost starting guard Joshua Langford to a foot injury before the first game, and a week later, Winston’s brother, Zachary, was hit and killed by a train.

“He was a shell of himself today,” Michigan State coach Tom Izzo said of Winston. “I think it’s been a lot on him. I couldn’t have gone through what that kid has gone through, no way. He just looked tired the whole time, I think because of the mental stress he’s going through.”

Michigan State lost its opening game to No. 9 Kentucky, but bounced back with three straight wins, including a hard-fought victory at No. 13 Seton Hall.

Virginia Tech started the season 5-0 for the second straight season - a first since 1981-82 - but has a revamped roster under Young, who took over after Buzz Williams left for Texas A&M.

The new-look Hokies made a school-record 21 3-pointers against Delaware State in their previous game but had to play a more grinding style against the gritty Spartans.

“It’s difficult to sit that long,” Winston said. “I’ve got to be smarter than that, make better decisions for my team.”

Virginia Tech picked up the kind of determined, resume-building win that could look awfully good when Selection Sunday comes around.

Winston was not able to conjure up any magic and the Spartans clearly have some flaws to work out until Langford returns in January at the earliest.