The Spartans certainly thought the pivotal inbounds play would go to Williams. They just couldn't stop him from getting the ball — or the bucket. 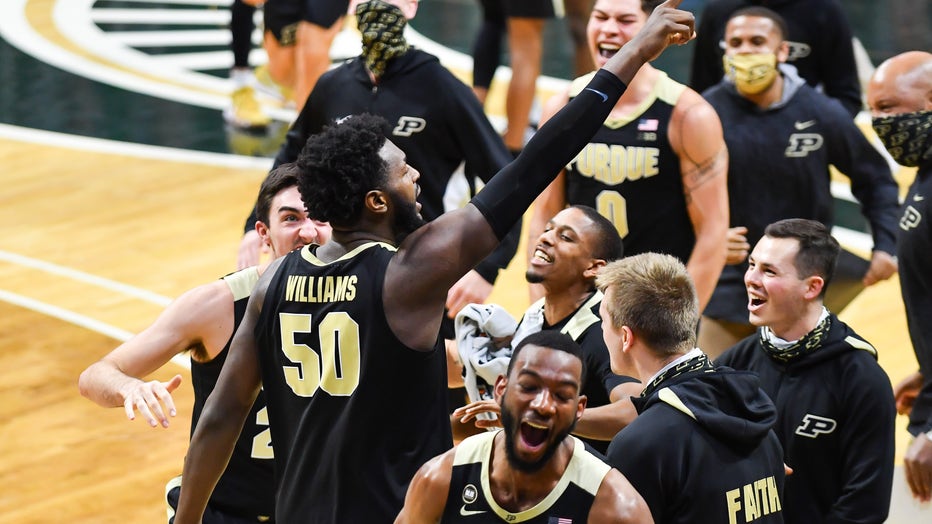 EAST LANSING, MI - JANUARY 08: Purdue Boilermakers forward Trevion Williams (50) celebrates with his teammates after hitting the game-winner during a college basketball game between the Michigan State Spartans and the Purdue Boilermakers on January 8

Williams made a short jumper with 4.5 seconds left and scored 22 of his 26 points after halftime, rallying the Boilermakers over the Spartans 55-54 on Friday night after trailing by 17.

Aaron Henry, who scored 13 points, missed a runner from the left side of the lane just before the buzzer to seal the stinging setback for the Spartans.

"One of the more disappointing losses," coach Tom Izzo said. "Give Purdue credit."

"He was the difference in the game," Izzo said.

"We didn’t deserve to win," Izzo said. "They deserved to win. They made winning plays."

Williams did not connect on his last attempt at the line with a chance to pull Purdue into a 54-all tie with 9.8 seconds left, and later said it was a fortunate miss.

The Spartans and Boilermakers both got to the loose ball after the missed free throw, and the visitors had the alternate possession arrow pointing in their direction. Williams caught a lob pass on an inbounds play and took full advantage with a short, floating, go-ahead jumper.

"We all know we’re capable of competing against anybody in the country," Williams said.

Early in the game, the Boilermakers looked rusty playing for the first time in nearly a week. Their game on Tuesday against Nebraska was postponed.

Michigan State's Joshua Langford scored seven of his 10 points in the first half.

"There's no need to hang our heads, it’s too early in the season," Langford said. "The loss does hurt, especially losing like that when we had the lead."

Purdue: The comeback in the second half can help the team gain confidence in the future, knowing it can rally from a big deficit against a ranked team on the road — and win.

"A good road win for us," coach Matt Painter said. "We didn’t shoot the ball well. We didn’t play well in the first half. But anytime you can figure out a way to win, no matter how ugly it is, you’re just hoping it can build confidence with your team."

Michigan State: The offensive woes include turning the ball over and shooting the ball poorly, a combination that is holding the team back.

Michigan State finished with 14 turnovers, most of which were committed during the collapse.

"We had 10 of them in the second half and never got in a rhythm," Izzo said.

Players and coaches for both teams along with officials stood in a circle, with arms linked, around the Spartans' logo in the middle of the court before the game. They wanted to send a message that

"I was so sickened by the ridiculous events in Washington D.C. and I made the decision," Izzo said. "Maybe a bunch of 20 year olds can teach a bunch adults."

Izzo approached Painter with the idea, and the Boilermakers were all on board.

"America needs to be able to see that — especially white America," Painter said. "We need to have great leaders, and great leadership in our country right now."

The Spartans should stay in the poll when the next

Michigan State: Travels to play No. 5 Iowa on Thursday.