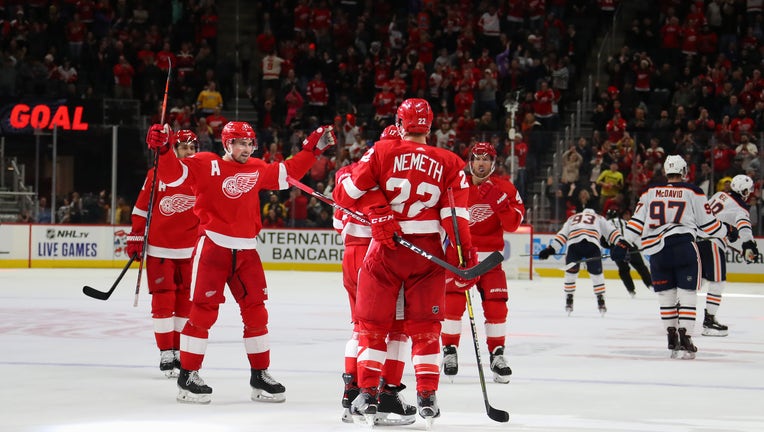 Larkin and Patrik Nemeth had goals in the first period, and the Detroit Red Wings defeated the Edmonton Oilers 3-1 Tuesday night to end an eight-game losing streak.

Larkin had the challenge of being on the ice when McDavid was skating for much of the night and responded well enough to hold the superstar to one assist and three shots.

"I thought Larkin's line did a really good job on McDavid until the second half of the third period," Red Wings coach Jeff Blashill said. "Larks plays his best hockey when he matches up against other teams' best."

Jimmy Howard made 31 saves for the Red Wings, who won for the first time since Oct. 10 against Montreal.

"I guess it's a relief for us," Larkin said.

Larkin converted on a power play 7:41 into the game, lifting the puck from the front of the crease. Nemeth, who signed as a free agent last summer, scored his first goal with the Red Wings less than a minute later.

"We knew they were going to come out fast because of their losing streak, and then we let them get a couple goals early on," Edmonton center Ryan Nugent-Hopkins said. "I thought we fought our way back into the game, but we have got to find a way to score."

A long scoreless stretch for both teams ended with 7:12 left when Leon Draisaitl scored from the right circle to pull Edmonton within one.

Edmonton had a 4-on-3 power play shortly thereafter but could not take advantage despite McDavid and Draisaitl putting shots on net.

"All their lines and their defensemen can skate," McDavid said. "And, they do a good job of clutching and grabbing to clog up the middle."

The Oilers entered the game as the NHL's No. 1 team on the power play and ended it scoreless with the man advantage for the first time this season when earning three or more power plays.

"Our goalie was our best player," Larkin said. "We needed that."

Mikko Koskinen stopped 25 shots for the Oilers, who have dropped four of their last five after opening the season 7-1.

Koskinen, who entered 5-0, gave up two goals on the first seven shots he faced before keeping his team in the game.

Speedy forward Andreas Athanasiou had a pair of breakaways for Detroit and was denied each time by Koskinen.

"It's a heck of a lot harder to chase a game than it is to play with the lead," Oilers coach Dave Tippett said. "That's just how this game is built right now. It's frustrating, but this wasn't a lack of effort. We've just got to find some scoring in our lineup somewhere."

NOTES: Oilers general manager Ken Holland, who left Detroit when Steve Yzerman was hired to replace him earlier this year, was given an ovation during an early break in the game. ... Detroit assigned RW Evgeny Svechnikov to the AHL's Grand Rapids Griffins and recalled Joe Hicketts from the Griffins. ... Detroit removed LW Adam Erne from injured reserve and put LW Justin Abdelkader on IR retroactive to Oct. 23. ... McDavid played in his 300th NHL game.

Oilers: Play on Wednesday at Columbus.