MJ Melendez scored a run and drove in another while Michael A. Taylor had three hits and scored a run. Witt reached base three times.

Royals starter Max Castillo, recalled from Triple-A Omaha before the game, allowed two runs and five hits and struck out five in 4 2/3 innings. 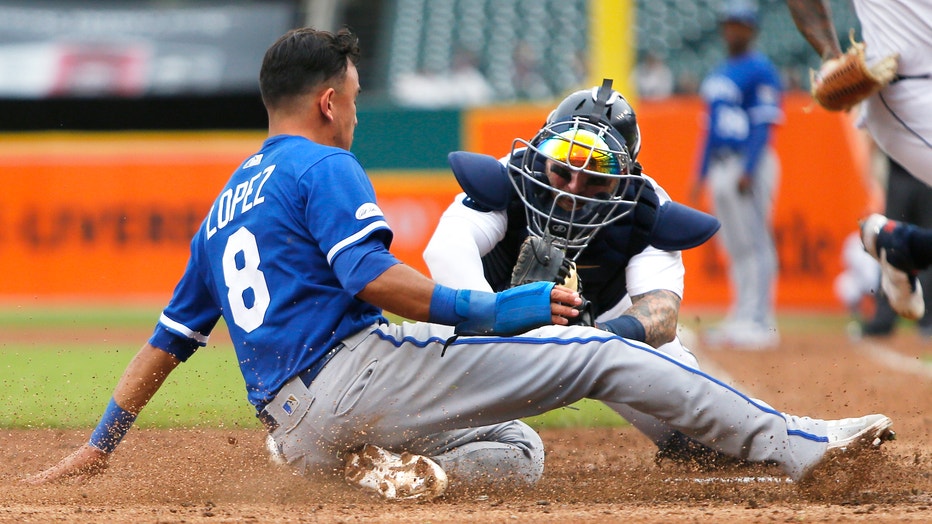 DETROIT, MI - SEPTEMBER 4: Nicky Lopez #8 of the Kansas City Royals is tagged out by catcher Tucker Barnhart #15 of the Detroit Tigers while trying to score from first base during the eighth inning at Comerica Park on September 4, 2022, in Detroit, M

The Royals took a 2-0 lead in the fourth on Nicky Lopez's RBI single and Melendez's bases-loaded walk.

Detroit quickly tied it in the bottom of the inning on Castro's sixth homer this season.

Kansas City left the bases loaded in the seventh.

In the eighth, Lopez was thrown out trying to score on a Melendez double. Witt's double past third baseman Jeimer Candelario drove in the go-ahead run.

Tigers designated hitter Miguel Cabrera was placed on the 10-day injured list with a left biceps strain. The team is hopeful Cabrera, 39, can return to the lineup before the end of the season. He was injured during the series opener on Friday.

"As soon as he can initiate strength exercises, that will be the next step for him," manager A.J. Hinch said. "Once the strength gets to a certain point, when it's extended and he doesn't feel the resistance and it's not an issue, then he'll start his hitting program."

Royals: RHP Wyatt Mills, who pitched two scoreless innings in relief on Saturday, was optioned to Triple-A Omaha to make room for Castillo.

Tigers: With Cabrera sidelined, the Tigers recalled 1B Josh Lester from Triple-A Toledo. Lester was batting .243 with 25 homers and 82 RBIs for the Mud Hens. To make room on the 40-man roster, OF Austin Meadows was transferred to the 60-day IL.

Royals: RHP Brady Singer (7-4, 3.33 ERA) will start the opener of a three-game home series against the Cleveland Guardians on Monday. He's 2-0 with a 4.21 ERA in seven career appearances against Cleveland, including six starts.

Tigers: LHP Tyler Alexander (3-8, 4.76 ERA) will start the opener of a three-game road series against the Los Angeles Angels on Monday. Alexander's only victory in six starts last month came against the Angels on Aug. 20, when he allowed three runs in six innings.

DETROIT, MI - SEPTEMBER 4: Nicky Lopez #8 of the Kansas City Royals is tagged out by catcher Tucker Barnhart #15 of the Detroit Tigers while trying to score from first base during the eighth inning at Comerica Park on September 4, 2022, in Detroit, M