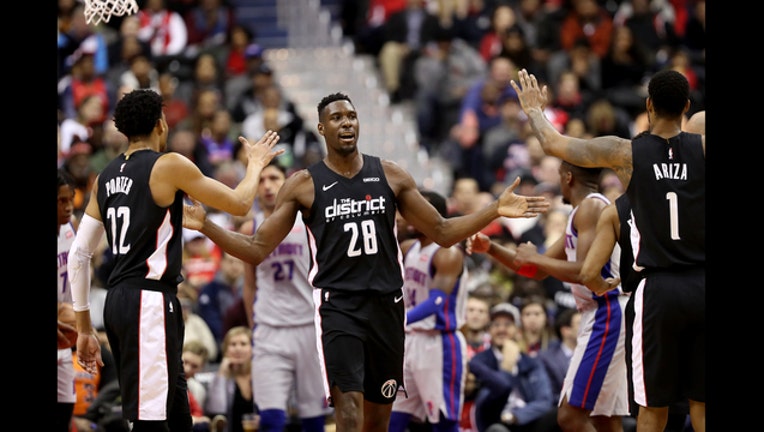 WASHINGTON, DC - JANUARY 21: Ian Mahinmi #28 of the Washington Wizards celebrates with Otto Porter Jr. #22 and Trevor Ariza #1 after getting fouled by the Detroit Pistons in the first half at Capital One Arena. (Photo by Rob Carr/Getty Images)

WASHINGTON (AP) - Exchanging their freewheeling ways for an improved defensive showing, the Washington Wizards looked like an entirely different team in their first game back from London.

The Wizards turned in their best defensive performance of the season on Monday in beating the Detroit Pistons 101-87. Even though Blake Griffin put up a game-high 29 points, Detroit's scoring output was the lowest by a Washington opponent this year.

"It was just effort," said Bradley Beal, who scored 16 points. "It's just a matter of being locked in, locking in to the game plan. We let Blake get a little comfortable, but for the most part we did a good job of taking all their actions away and making it difficult for them."

After beating the New York Knicks in London last week, the Wizards now have won two in a row and are 7-3 in their past 10 games.

Washington held Detroit to 30 percent shooting in the first half and never let their lead dip below 10 points in the second. The Wizards limited the Pistons to two offensive rebounds and had seven players in double figures, led by Trevor Ariza with 20 and Otto Porter Jr. with 19 off the bench.

"I looked at that in the first quarter (thinking) this is a good night for us: We have a lot of assists and everybody's touching the ball and everybody's getting shots," coach Scott Brooks said. "We have to be able to continue to play with a lot of pace and a lot of extra passing."

Pistons coach Dwane Casey was hoping players would drink a gallon of coffee to be ready for the 2 p.m. start. Instead, Detroit scored just 17 points in the first quarter and was never able to recover.

Pistons: Their 34 first-half points set a new season low. ... C Andre Drummond missed his second consecutive game with a concussion. Casey said Drummond is still in the concussion protocol and didn't travel with the team ... G Ish Smith sat out for the 21st time in 24 games because of a right adductor injury.

Wizards: Beat Detroit for the eighth consecutive time at home. ... Tomas Satoransky had a game-high eight assists, including a pass through Zaza Pachula's legs in the first quarter. ... Signed G Gary Payton II to a 10-day contract 15 years after general manager Ernie Grunfeld, then with Milwaukee, traded for Payton's father. ... Played at home on Martin Luther King Jr. Day for the 20th consecutive time and 16th at home over that stretch.

The Wizards began bringing Porter off the bench when he returned following a right knee injury to ease him back in. It has since become a habit, not because Porter is still building up but because Brooks likes how his team is playing and doesn't want to mess with success.

"Otto's getting obviously starter minutes or about nearly as many minutes as he had as a starter," Brooks said. "The thing I like about it is he's getting more shots, and we need Otto to take more shots."

Two days after losing to Sacramento on a shot by Buddy Hield that the Pistons thought was a double-dribble, Casey said he'd be on board with a coach's challenge system - if it can be done quickly without games dragging.

"Very difficult because of the time constraints you have within the game," Casey said. "If you can fit it in within that two-hour (window) or whatever it is constraints that we have with television, I think it can be effective."

Injured Redskins quarterback Alex Smith took in the game from a suite wearing a substantial cast and brace on his right leg. Smith, who broke his tibia and fibula Nov. 18 against Houston, spent almost a month in the hospital after multiple surgeries, and his playing future is in doubt.

Pistons: Visit the New Orleans Pelicans on Wednesday in the second stop on their three-game road trip.