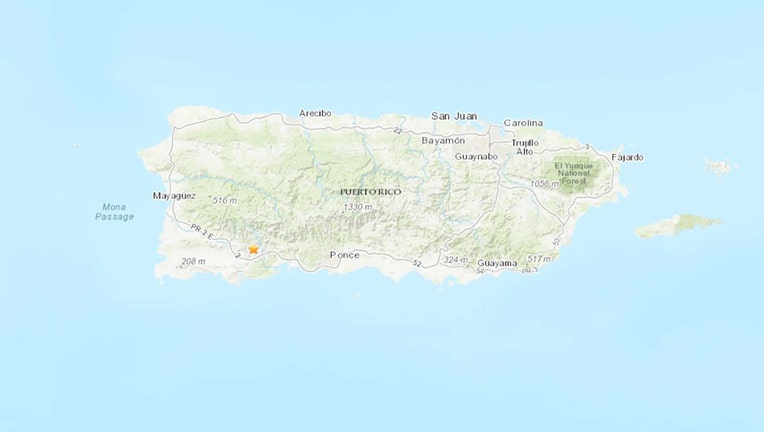 Prior to Wednesday's temblor, a flurry of earthquakes that hit the island was topped by a magnitude 6.4 earthquake last Tuesday that killed one person, injured nine others, and damaged hundreds of buildings.

Many living along the southern coastline were left without water service and more than 4,900 people sought refuge in government shelters.

More than 1,280 earthquakes have hit Puerto Rico's southern region since Dec. 28, more than two dozen of them magnitude 4.5 or greater, according to the USGS.

On Saturday, four days after a 6.4 magnitude temblor, a magnitude 5.9 earthquake shook Puerto Rico again, causing millions of dollars of damage along the island’s southern coast. The recent quakes have toppled homes, schools and businesses.

The 5.9 quake was then followed by several aftershocks, including a magnitude 5.2 temblor less than two minutes later.

Gov. Wanda Vazquez estimated damage from Tuesday's earthquake at $110 million, with a total of 559 structures affected. She said her administration was immediately releasing $2 million to six of the most affected municipalities.

Vázquez is seeking a major disaster declaration from the U.S. government, which would free up more federal funds.

As a result of Saturday's quake, Puerto Rico's Electric Power Authority said outages were reported across much of southern Puerto Rico and crews were assessing possible damage at power plants. Officials said they also were going back to reassess all structures previously inspected, given the strength of Saturday's quake.

More landslides and damaged homes were reported, along with severe cracks on a bridge in the southwest coastal town of Guanica, where Aurea Santiago, a 57-year-old resident, said she saw big boulders falling on a nearby road.

“We have been through a lot, but what's important is that we are alive, and people are helping us,” she said.

Saturday's quake, which initially had been calculated at magnitude 6.0, was the strongest shake since Tuesday's magnitude 6.4 quake — the most potent to hit the island in a century.

Many people staying in shelters are fearful of returning to their homes, and others unable to because of extensive damage.