DETROIT (FOX 2) - Despite the vibrant colors and pictures painted on a wall near Eight Mile and Wyoming, the structure, known as the Birwood Wall, represents a dark time in the City of Detroit.

"The Wall was constructed to divide one community from another community," said Teresa Moon, an activist. And that division was based on race.

A wall on Eight Mile and Wyoming with a dark history

The Birwood wall, located near Eight Mile and Wyoming has a dark history, despite the vibrant colors that now span its surface. And activists want to shine a light on that history.

In the 1940s, this area was home to African American families including Moon's. But a builder wanted to build a new group of housing for whites only. However, that builder encountered a problem.

"But he couldn't get funding 'cause of redlining and they said if you build or go near black people, everything's going to be destroyed."

So the solution was a wall. However, its purpose was short-lived.

"The wall was built in 1941. By 1950, the people on the other side of the wall left and those houses were bought out by black people," said Moon.

And as the Civil Rights movement grew, Black and white families started living together in the same neighborhoods.

"Growing up in the '50s and into the '60s, there was a lot of racial tension. There was the beginning of the civil rights movement, people were trying to get things to a point where that division or that gap was closed," said Moon.

As times changed, so did the meaning and purpose of the wall. It now serves as a backdrop for a community park.

"There's a beautiful mural on it, which was done by Charles Miller who was a local artist in the city of Detroit," said Moon. 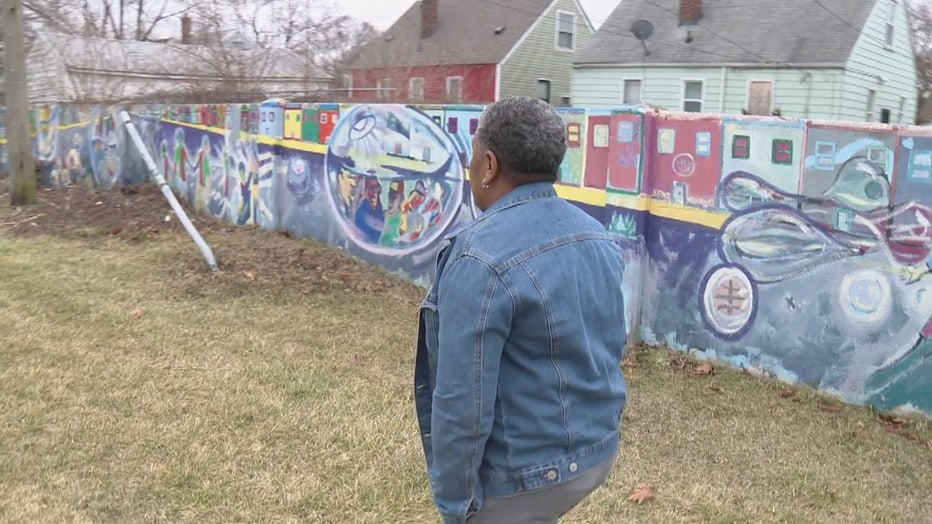 And now there's a push to designate this wall as a historical marker.

"I'm all for - I support it 100 percent because it's one of the oldest black communities in the city of Detroit. It's Black History Month, but that doesn't have anything to do with it as far as I'm concerned," Moon said. "It is just a history that needs to be told."