(FOX 2) - A happy couple tied the knot at Beaumont Hospital, where the groom spent more than a month unconscious and fighting for his life with COVID-19. The couple wanted to pledge their love to one another in front of the same frontline heroes who helped save his life.

"They did such an incredible job. It takes the very best of us to be that compassionate," Avery Garcia said. The 37-year-old and his new bride 43-year-old Julianna Garcia of Shelby Township are forever grateful.

Shelby Twp. couple marries in hospital where groom was treated for COVID-19

He spent more than a month on a ventilator at Beaumont, fighting for his life with COVID-19. And he miraculously survived and wanted to pledge his love to his bride in front of the same front line heroes who helped save his life.

"I'm a walking example of their skill and their care," Avery said.

Working as an EMT during the start of this pandemic, Avery says back in March he noticed a rash. Avery, Julianna and even doctors at first thought it was hives.

A test came back positive for COVID-19. Julianna tested positive as well.

She had shortness of breath but within days, Avery, who says he has no underlying health issues was quickly getting worse.

"Medical personnel are the worst patients by the way. So I was thinking no it's fine, it's fine," Avery said. But, everything wasn't fine. Avery was unable to breathe and was put on a ventilator April 18.

"Up until that point, I assumed that everything was going to be okay. As soon as someone has to be put on a ventilator for COVID, their chance of dying is anywhere between 50 and 90%," Julianna said.

Avery was unconscious for 35 days, and Julianna was unable to visit but she got updates as often as possible.

"For about a week they had to actually shut down my lungs completely. And the treatment called ECMO would oxygenate my blood," Avery said. 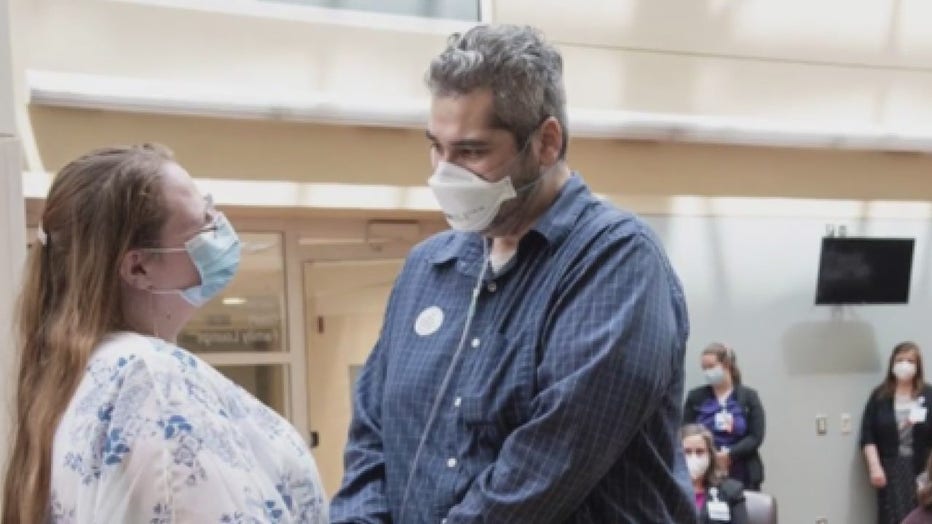 Julianna finally got the phone call that Avery had woken up and although Julianna didn't want to ask him if he wanted to get married while he was still "loopy" - that's exactly what she did.

After losing 65 pounds and communicating to hospital staff by pointing at letters, Avery was finally able to sit up.

And June 26, with the folks who helped save his life surrounding them - masked up and six feet apart - Avery and Julianna exchanged their vows in the same nursing unit where he was treated.

While Avery says after all of this he can't believe his mind is the same and his memories are intact, his outlook is much different.

"I was lucky. I lost something but I gained so much more," Avery said. He truly appreciates those who fought to keep him alive and the strong woman by his side.

"Even with everything I went through I'd do it again. I have a partner for life. It gives you a strength that doesn't have an end. She is my everything."