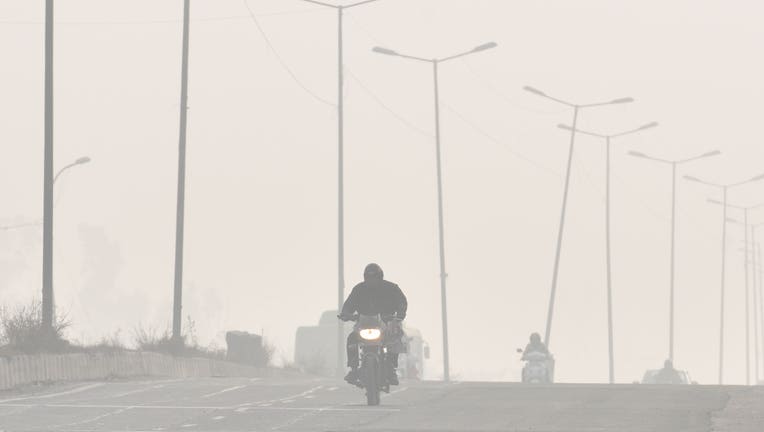 FILE - A man rides a motorcycle amid heavy smog on a winter morning, at Zakhira, on November 30, 2019 in New Delhi, India. (Photo by Sanchit Khanna/Hindustan Times via Getty Images)

LOS ANGELES - A recent study by University College London (UCL) says that those exposed to higher levels of air pollution have a higher chance of experiencing depression leading to death by suicide.

The study published in the journal Environmental Health Perspectives reviewed data from a multitude of observational studies out of more than 16 countries, ranging in size from 958 to 69,966 participants. They found a link between exposure to harmful particles in the air and various mental illnesses including depression, anxiety, bipolar disorder and more.

Researchers say they found that people who are in constant contact with particle matter measuring up to 2.5 micrometers in diameter (PM2.5) for at least six months have a statistically significant risk of mental illness.

The Department of Environmental Conservation says that the diameter of human hair is roughly 100 micrometers.

PM2.5 is usually comprised of things like dust from industrial activities, residue from burnt up petroleum-based fuels, chemical reactions and even soot and smoke from fires.

While the authors of the study admit that more research is needed to confirm a causal link between exposure to unhealthy levels of particle matter and mental illness, researchers say the evidence is clearly there.

"We already know that air pollution is bad for people's health, with numerous physical health risks ranging from heart and lung disease to stroke and a higher risk of dementia," said the study's lead author, Dr. Isobel Braithwaite (UCL Psychiatry and UCL Institute of Health Informatics).

“We found quite consistent results across the studies we reviewed that analysed the relationship between long-term air pollution exposure and depression, even after adjustment for many other factors which could explain the association. The association seems to be similar in magnitude to those that have been found for some physical health impacts of particulate matter, such as all-cause mortality," Dr. Braithwaite said.

Mental health is not the only symptom of exposure to increasingly concerning levels of air pollution that are becoming more and more common for future generations.

Another study published in August in the journal JAMA found that air pollution could actually be causing emphysema in people who have never even picked up a cigarettes before in their lives.

It’s the ever-increasing levels of smog that can greatly contribute to dangerous levels of lung damage that is typically found in someone who smokes a pack of cigarettes every day for 29 years.

While air pollution has been known to contribute to cardiovascular and respiratory illnesses, a disease commonly thought to be contracted from smoking cigarettes is now commonly associated with harmful particles in the air that we breathe.

A study published in October in the British Medical Journal found that every 0.001 part-per-million of PM2.5 in the air resulted in a spike of 2050 extra hospital admissions for various illnesses including UTIs and sepsis, racking up nearly $46 million in health care costs.

The World Health Organization (WHO) estimates that nearly 4.2 million people die every year as a result of exposure to air pollution.

As the rate of various illnesses - commonly thought to be the result of things other than poor air quality - continue to rise, it is a wonder as to when exactly governments will act on the matter, especially since over 80 percent of people who live in urban areas are exposed to levels that exceed WHO guideline limits.