Al Sobotka's attorney says a medical condition led him to urinating publicly in the Zamboni garage - leading to his sudden firing.

FOX 2 - Al Sobotka spent more than five decades working for the Red Wings before he was suddenly fired two months ago.

"No victory lap on the Zamboni, no goodbye cake, nothing," said attorney Deborah Gordon.

An ice cold departure – after 51 years with the Red Wings, Zamboni driver, and the man known as ‘Octopus Al' Sobotka fired in February.

"Olympia Entertainment up and fires him, because on one occasion he urinated in the Zamboni garage," Gordon said.

Sobotka’s attorney, Deborah Gordan says a fellow male employee in the garage at Little Caesars Arena caught him urinating and reported him to management.

"The company will say this is a terminable offense but I really beg to differ," Gordon said.

A week suspension, then – Sobotka was fired. Deborah says he wasn’t even able to box up his things. This was his first offense, in a sterling employee record.

"He was part of the heart and soul of Hockeytown. Who's been part of Hockeytown longer than Al? Nobody I can think of sitting here," she said.

On Wednesday Gordon filed suit on behalf of Sobotka against Olympia Entertainment the owner of LCA. They’re claiming age discrimination.

Months before he was ousted, boss’ allegedly made comments about Sobotka, "getting old."

And Gordon says, there is disability discrimination too.

"Al definitely has a condition, a prostrate condition, which causes an urgency to urinate," she said. "And he did what was expedient in the moment, thinking no harm was done."

Gordon says Sobotka admitted to the urination situation and told higher-ups about his condition after it happened.

"Before we filed this lawsuit I called them and asked if there is any chance you'd take Al back, he was such a good employee, he really loves you guys. And the answer was no," Gordon said.

Olympia Entertainment released a statement, saying "We do not comment on pending litigation." 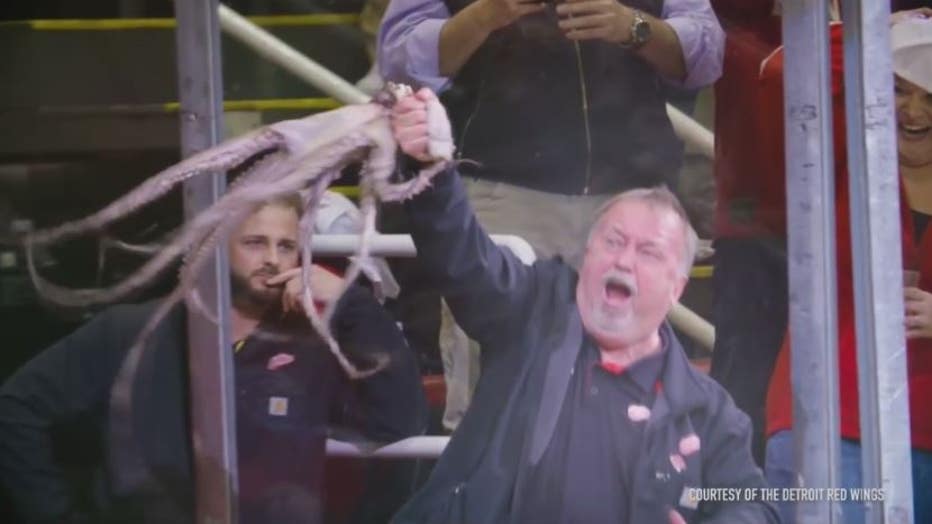 Al Sobotka removes an octopus from the ice during the playoffs - a Red Wings tradition. Photo courtesy: Detroit Red Wings