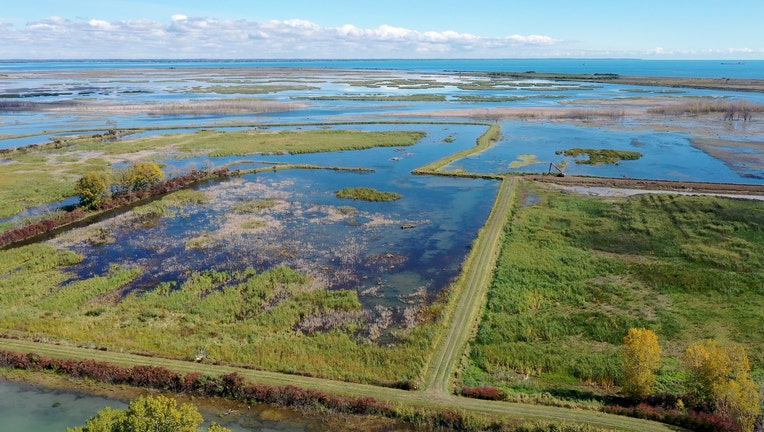 Pointe Mouillee State Game Area in Monroe County. A pilot project at the area looks to restore wetlands for the purpose of cycling out toxins that cause algal blooms. (Courtesy of Ducks Unlimited)

That's what a study from conservation groups found, estimating harmful algal blooms cost Michigan $5.9 million a year in the small portion of the state that touches Lake Erie.

The study comes with a solution, however. A $30 million investment would restore and conserve wetlands that could boost tourism and filter toxins out of the Great Lakes, offering both economic and public health benefits.

The Michigan United Conservation Clubs and Ducks Unlimited is working with several state agencies in Michigan to secure funding from the American Rescue Plan.

"Now knowing the devastating economic impacts of harmful algal blooms on our local communities, charter captains and businesses, we can start to look for answers," Amy Trotter, executive director of the MUCC said. "Michiganders should be able to fish, boat and enjoy western Lake Erie uninhibited by worrying about being able to eat their catch or what damage it may inflict on their equipment."

Data from the Michigan Department of Natural Resources backs up the claim.

The two sites in Michigan that experience the worst blooms are in western Lake Erie and Saginaw Bay, where agricultural runoff sends nutrients into the water from farms, which feeds algae and contributes to bloom events.

The most extreme blooms can get so big they're visible from space.

While the Maumee River in Ohio is a primary driver of the algal blooms that happen in Lake Erie, nutrient runoff from Southeast Michigan in the Detroit River and off the coast of Monroe County also contribute to the events.

The River Raisin in Monroe is another system that feeds the events.

MORE: Why more people could be moving to the Great Lakes in the next few years

The bloom events are known to starve water bodies of oxygen, leading to dead fish that can't survive in the environment. One event was so bad it contaminated most of Toledo's drinking water.

The solution to algal blooms is to prevent the nutrients from further feeding the algae that is present in the water. Wetlands that are placed at the mouths of rivers like both River Rasin and the Maumee River could filter out the added phosphorous and nitrogen that is produced from farming.

The wetlands could reduce the amount of nutrients entering Lake Erie by up to 80%, the study shows.

The systems act as nature's kidneys when they are met with contaminated water, removing harmful chemicals and other nutrients from the water effectively. While Southeast Michigan used to be covered in wetlands, most have been removed to accommodate development in the metro region.

The partnership between government and other conservation groups seeks to restore some of that activity.

The proposed $30 million investment would support at least 15 projects that could filter water over 20,000 acres of land.

Currently, a separate pilot project is underway at Pointe Mouillee State Game Area, which sits south of the Huron River.

"We need leaders in Lansing to devote real resources to this growing problem, to improve quality of life for residents and habitat for wildlife," said Kyle Rorah, director of policy for DU’s Great Lakes/Atlantic Region. "We thank leaders like Reps. Cherry and Bellino and Senator Zorn for their support."